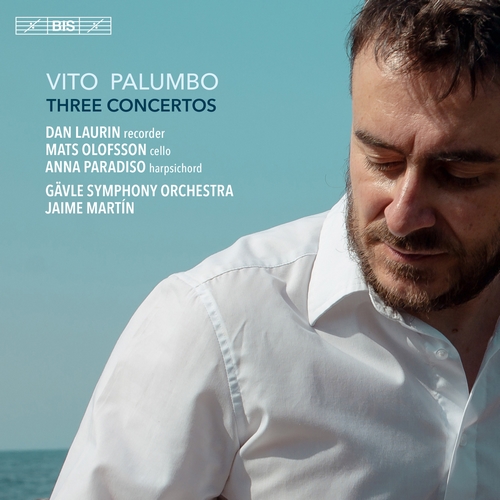 Concerto Barocco
Cello Concerto
Recorder Concerto
The genesis of this disc was Dan Laurin’sidea to commission a concerto for recorder and symphony orchestra. He had performed a number of such works already, but felt that the new, more powerful ‘Eagle’ recorder developed by the maker Adriana Breukinkcould help with avoiding the usual problems with balance between soloist and orchestra. Having interested the GävleSymphony Orchestrain the project, he then approached the Italian composer Vito Palumbo–and the ball was set in motion! In 2013, after an intense collaboration between composer and soloist, the concerto was finished –a single movement almost thirty minutes long, and according to Laurin‘by far the most difficult piece I have ever encountered’. The ‘Eagle Concerto’ is here coupled with two earlier concertanteworks by Palumbo, featuring Dan Laurin’sclose chamber music partners, harpsichordist Anna Paradiso and cellist Mats Olofsson. All three works differ greatly in style, forming a complex portrait of the composer. Palumbo himself describes the lightly scored Concerto Baroccoas ‘a reappropriationof the baroque style’, while the large-scale Cello Concerto is intended as a tribute to Shostakovich. The Recorder Concerto, finally, is in the words of its creator ‘a large poetic fresco that to my mind is truly operatic’.
Recording: May 2016 at Gävle Concert Hall, Sweden (Cello Concerto, Recorder Concerto); March 2017 at Petruskyrkan, Stocksund, Sweden (Concerto Barocco)