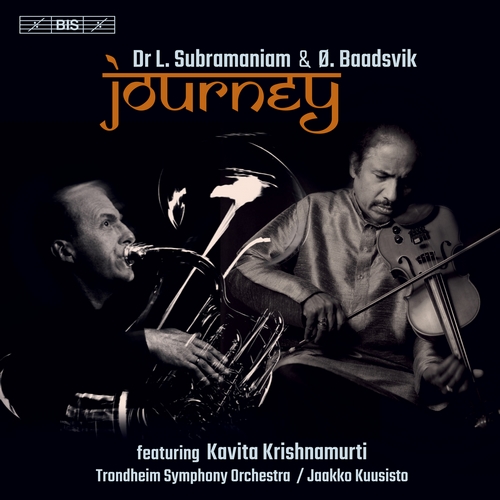 Concerto for Indian Violin and Tuba
Journey
Eclipse
A Tribute to Bach
Called ‘the God of the Indian violin’, Lakshminarayana Subramaniam has collaborated with leading representatives of Indian and Western classical traditions, from Ravi Shankar to Yehudi Menuhin. But with a strong belief in music as a universal language he is also a leading figure in fusion music, collaborating with musicians of all genres and nationalities, from Stephane Grappellior George Harrison to Stevie Wonder and Herbie Hancock.

Dr Subramaniamfirst met the Norwegian tubaist Oystein Baadsvikin 2014, during his own Lakshminarayana Global Music Festival, where Baadsvik was performing. The encounter developed into a recording project, which grew to involve Subramaniam’s regular percussionist D S R Murthy, his son Ambi (also on the violin), the Latvian keyboardist Toms Mikals, and in the opening and closing numbers on the disc the Norwegian Trondheim Symphony Orchestra conducted by Jaakko Kuusisto from Finland. Together they perform four works by L. Subramaniam himself, including a double concerto for violin and tuba written for the occasion. In Eclipse they are also joined by Kavita Krishnamurti, one of India’s most celebrated playback singers, who has recorded some 15.000 songs for use in soundtracks to countless Indian films.
Recording: June 2016 at Olavshallen, Trondheim, Norway (tracks 1–3, 6); September 2017 at Sound Division Studios, Riga, Latvia (tracks 4 & 5)