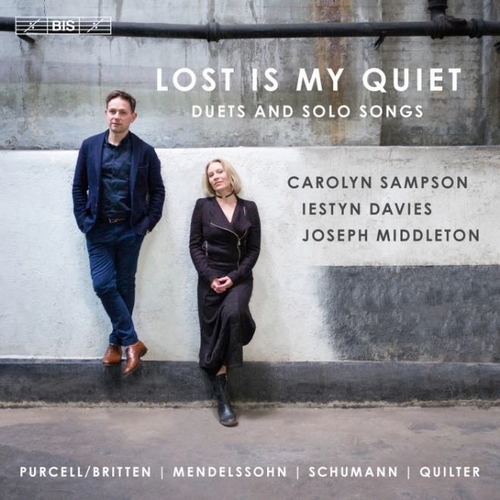 Henry Purcell, realized by Benjamin Britten:
Sound the trumpet
Lost is my quiet
If music be the food of love (third version)
Music for a while
No, resistance is but vain
Celemene

Roger Quilter:
It was a lover and his lass (arr.), Op.23 No. 3
Weep you no more, sad fountains
Music, when soft voices die, Op.25 No. 5
Drink to me only with thine eyes (arr.)
Love’s philosophy, Op.3 No. 1
Love calls through the summer night
Carolyn Sampsonand IestynDavieshave collaborated on many occasions in the field of Baroque opera and oratorio, but on this occasion they venture into a somewhat different territory. In the company of Joseph Middleton, they have been exploring the Lieder for one and two voices of Mendelssohn and Schumann, combining them with songs and duets by Roger Quilter. And even though the disc actually opens with a set of Purcellsongs –repertoire which both singers have previously made their mark in –they are here performed with the piano accompaniments realized by Benjamin Britten, turning them into something quite new and different.

‘Creamy’, ‘luminous’ and ‘supple’ are words that often appear in reviews about both Carolyn Sampson and IestynDavies, and in these duets they achieve a marvellous blend as well as the utmost precision. They are aided in this by Joseph Middleton, described in The Telegraph(UK) as an ‘unfailingly sensitive accompanist'.