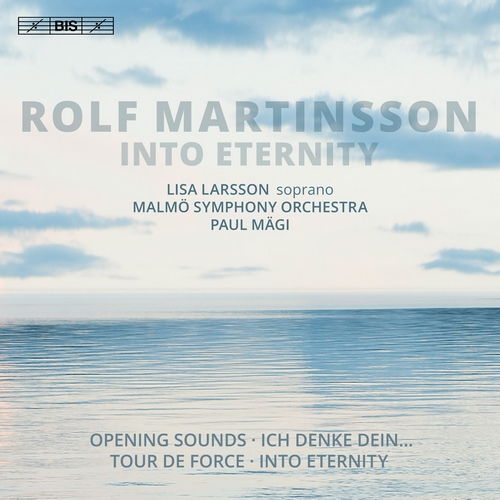 Opening Sounds, Op. 94
Ich denke Dein …, Op. 100
Tour de force, Op. 95
Into Eternity, Op. 103
The music on Presentiment, a 2018 release with four orchestral works by Rolf Martinsson, was described by one critic as ‘bold and uncompromisingly personal, eschewing avant-garde modernism and engaging us with solidly expert conventional techniques of composition and orchestration’ (MusicWeb-International.com). The present disc features more of Martinsson’s music, performed by the Malmö Symphony Orchestra – a body with which Martinsson has enjoyed a close relationship as its composer in residence.

In two of the recorded works, the orchestra – conducted by Paul Mägi – is joined by another of Martinsson’s regular collaborators, the soprano Lisa Larsson. Larsson is the soloist in Ich denke Dein..., a song cycle setting five poems by Goethe, Rilke and von Eichendorff, and in Into Eternity, a longer work which in its second half incorporates two poems by the Swedish poet Karin Boye. Into Eternity was composed for the opening of the Malmö orchestra's new concert hall in 2015, and Martinsson wrote it, as well as Ich denke Dein...,with Lisa Larsson in mind. Larsson also appears on the composer's previous monograph on BIS, in his settings of poems by Emily Dickinson; a performance that led one reviewer to proclaim her 'an expressive artist par excellence, who knows to savour every nuance of the poems' (klassik-heute.de).
Recording: May and September 2017 at the Malmö Live Concert Hall, Sweden. Plyta wydana w opakowaniu BIS ekopak.