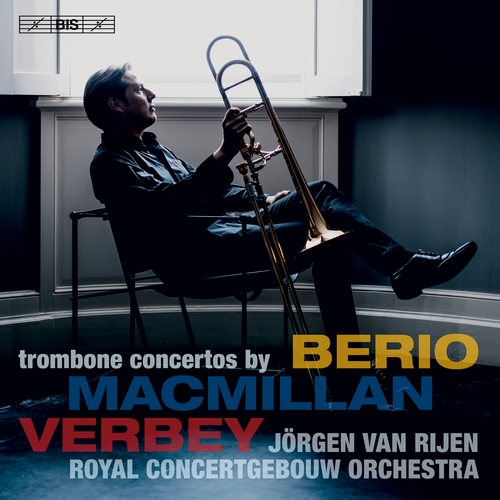 Luciano Berio:
SOLO for trombone and orchestra
Principal trombonist of the Royal Concertgebouw Orchestra, Jörgen van Rijen is also much in demand as a soloist with a special commitment to promoting his instrument. Various composers have written new pieces for him, including James MacMillan and Theo Verbey, whose works are included on the present disc together with Luciano Berio’s SOLO for trombone and orchestra.

The present recordings were made at concerts with the Concertgebouw Orchestra, conducted by Iván Fischer, Markus Stenz and Ed Spanjaard respectively. They have previously been showcased on three different discs on the RCO’s own Live Horizon label, and are gathered together here for the first time. The disc therefore highlights the versatility of van Rijenas a musician, but also of his instrument as perceived and presented by three very different composers.
Recorded at public concerts at the Concertgebouw, Amsterdam, the Netherlands on 16-17 December 2004 (Berio), 18-19 September 2007 (Verbey), 20-21 & 23 April 2017 (MacMillan). Trombone: Courtois 420 Legend. Płyta wydana w opakowaniu BIS ekopak.