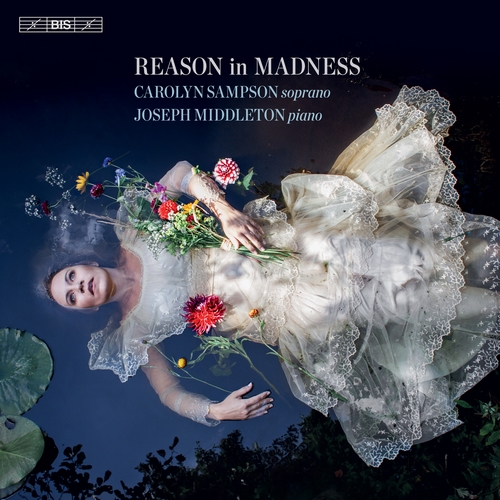 Francis Poulenc:
La Dame de Monte-Carlo
Throughout history men have feared madwomen, burning them as witches, confining them in asylums and subjecting them to psychoanalysis – yet, they have also been fascinated, unable to resist fantasizing about them. For their new disc, Carolyn Sampsonand Joseph Middleton have created a programme that explores the responses of a variety of composers to women whose stories have left them vulnerable and exposed. As a motto they have chosen an aphorism by Nietzsche: ‘There is always some madness in love, but there is also always some reason in madness.’

Brahms’ Ophelia Songs, composed for a stage production of Hamlet, appear next to those by Richard Strauss and Chausson, while Ophelia's death is described by both Schumann(in Herzeleid) and Saint-Saëns. Goethe’s mysterious and traumatized Mignon appears in settings by Hugo Wolfas well as Duparc, while his ill-used Gretchen grieves by her spinning-wheel in Schubert's matchless setting. Sadness and madness tip into witchery and unbridled eroticism with Pierre Louys's poems about Bilitis, set by Koechlin and Debussy. Sampson and Middleton end their recital as it began, with a suicide by drowning: in Poulenc’s monologue La Dame de Monte-Carlo, the elderly female protagonist has been unlucky at the gambling tables and decides to throw herself into the sea.
Recording: January 2018 at Potton Hall, Westleton, Suffolk, England. Instrumentarium: Grand Piano - Steinway D.