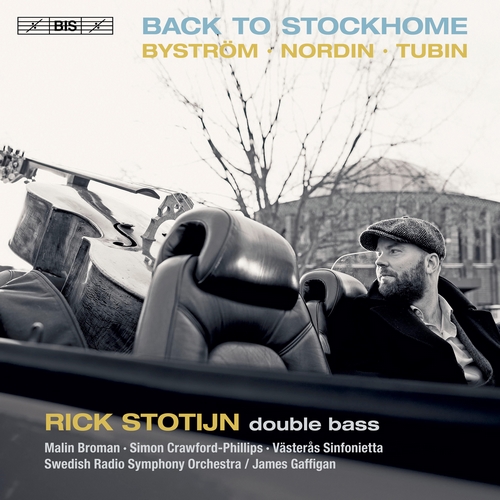 Byström / Tubin / Nordin: Back To Stockhome

Carin Malmlöf-Forssling:
In memoriam
For the past ten years Rick Stotijn has been making Stockholm his second home, finding musical inspiration as well as new friends there. The present disc is a reflection of this, with existing and new repertoire involving the double bass by composers who have all at some point lived and worked in the city. The oldest work, as well as the best known, is the Concerto for Double Bass by Eduard Tubin, composed in 1948. Stotijn performs it here with the support of his own orchestra, the Swedish Radio Symphony Orchestra under James Gaffigan.

The other concerto on the disc was composed especially for Stotijn and for the violinist Malin Broman by Britta Bystrom. Infinite Rooms (2016) is a double concerto - in which the violinist switches between violin and viola - with inspiration from the Japanese artist Yayoi Kusama. It was awarded the most important Swedish composition prize, Stora Christ Johnson-priset, in 2020, and comes with three 'Walks', potential encores which can also serve as bridges to the next work during the concert, be it by Schubert, Bruckner or Strauss. The orchestra heard in Infinite Rooms is the Vasteras Sinfonietta, conducted by Simon Crawford-Philips, who also appears on the disc in the role of pianist: Jesper Nordin's Piano Trio, is an adaptation by the composer for these performers, of an earlier score for violin, cello and orchestra. Closing the disc is In memriam by Carin Malmlof-Forssling, a brief vocalise for soprano here transcibed for the double bass.
Recording: 18th 20th April 2018 at the Västeras Concert Hall; 10-12 October 2019; 14th June 2020. Instrumentarium: Double bass by Raffaele and Antonio Gagliano, Naples 1846; Violin by Stradivarius, 1709, and viola by Bajoni, 1861; Steinway D grand piano.