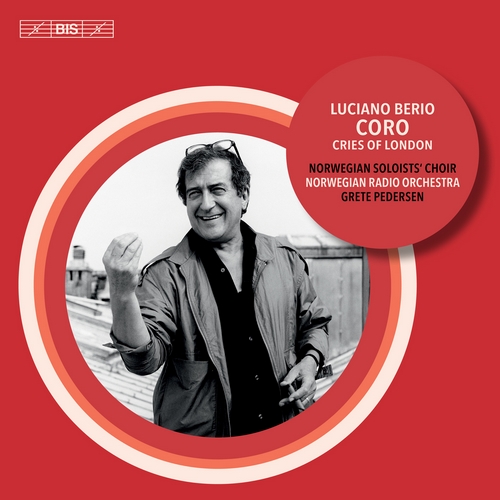 Coro per voci e strumenti
Cries of London for eight voices
Luciano Berio’s Coro has been described as the work that ‘exemplifies all the qualities that made him one of the leading composers of our time’. The work’s full title is ‘Coro for voices and instruments’, and the 40 voices and 44 instrumentalists do indeed make up a single choir – instrumentalists and singers sit together, with each singer paired with a particular player, and used both as soloists and combined in mass effects.

Composed in 1976, Coro is also a strikingly ‘global’ work: Berio’s use of texts (mainly translations of folk poetry) attributed to peoples – ‘Peruvian’, ‘Croatian’, ‘Sioux’ – turns the work into a chorus of cultures. The texts are laid out in 31 separate sections of varying length, but the overall effect is cumulative, not episodic. The only named author is the Chilean poet Pablo Neruda, who became a powerful posthumous voice following his death in 1973 in the wake of General Pinochet’s military coup. Along with other text fragments, his words ‘Come and see the blood in the streets’ keep returning during the course of the work, and the sense emerges of human individuals needing to be alerted to social and political developments demanding a collective response. Under its artistic director Grete Pedersen the Norwegian Soloists’ Choir has made acclaimed recordings of music ranging from Norwegian folk songs and Hildegard of Bingen to Bach, Brahms and Xenakis. Joined by the Norwegian Radio Orchestra it now takes on one of the major choral works of the past 50 years. The disc closes with Berio’s smaller scale Cries of London, performed by members of the choir.
Recording: February 2019 (including at a public concert on 2nd February) at the NRK Radio Concert Hall, Oslo, Norway [Coro]; September 2018 at the Oslo Concert Hall, Small Auditorium (Lille sal), Oslo, Norway [Cries of London]