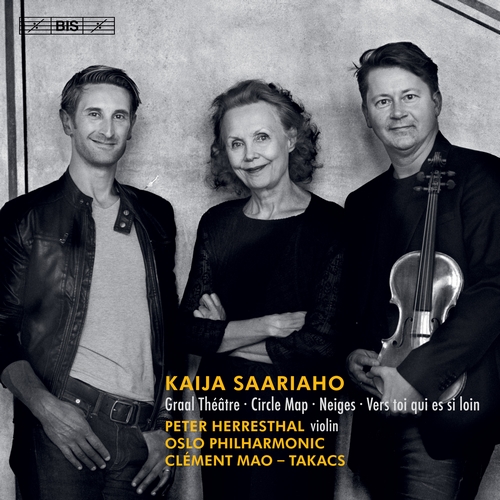 Vers toi qui es si loin for violin and orchestra
Circle Map
Neiges, version for 12 celli
Graal Théâtre for violin and orchestra
Several of Kaija Saariaho’sworks are named after natural phenomena that serve as a starting point to her compositional process. Composed in 1998, Neigeswas inspired by various qualities of snow and explores instrumental languages and colours similar to those found in her earlier works. On the present disc the piece is heard in its never-before recorded version for twelve cellos, performed by the cellists of the Oslo Philharmonic. Another source of inspiration has been medieval literature, which formed a point of departure for Graal Théâtre, the first concerto Saariaho wrote, as well as for the recent Vers toi qui es si loin(2018). Recorded for the fist time here, the piece is a transcription, made for the violinist Peter Herresthal, of an aria from the opera L’Amour de loin.

These two works for violin and orchestra bookend this amply filled disc, and frame Circle Map, a work in six movements for large orchestra. Permeating the work are six short poems by the 13th-century Persian poet Rumi, providing inspiration through their essence and vivid imagery, but also part of the musical material by way of a recording of them recited in Persian. This recording forms the raw material for the electronics included in the work, but also for much of the writing for the orchestra, for instance in terms of pitches and intonations. All four works are conducted by Clément Mao – Takacs, who has collaborated extensively with Kaija Saariaho and conducted her music across Europe and in the U.S.A.
Recording: June 2018 at Oslo Concert Hall, Norway. Instrumentarium: Violin: G. B. Guadagnini, Milan 1753, Bow: Eugene Sartory. Płyta wydana w opakowaniu BIS ekopak.