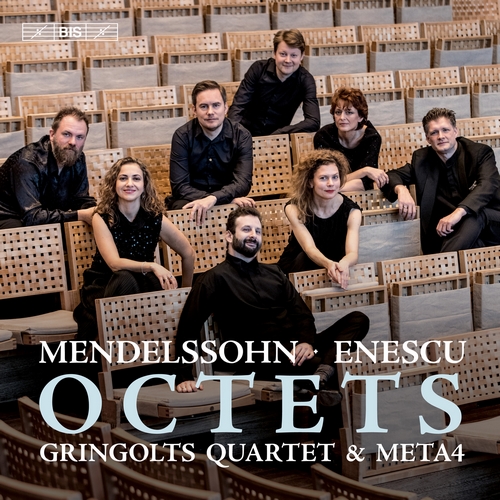 George Enescu:
Octet for Strings in C major, Op. 7
Before Felix Mendelssohn produced his Octet for strings in 1825, only Louis Spohr had composed for a similar combination of instruments. Rather than an octet, however, Spohr’s work was a ‘double quartet’ written for two equal but independent string quartets. Mendelssohn, on the other hand, treated the eight instruments as a single unit, collaborating ‘in symphonic orchestral style’, as he himself put it. He was only sixteen when he composed the Octet, full of a youthful ardour that has made it one of his most popular works. It is a farewell to the Mozartian style that had characterized Mendelssohn’s early production and at the same time a first step on the way to Romanticism.

The second octet on this disc is also a youthful work written at a time of transition, now from Romanticism to Modernism: George Enescu was 19 years old when he completed his Octet in C major in December 1900. The work is concentrated, complex and highly contrapuntal, a sounding illustration of what Enescu elsewhere described in words: ‘I am by nature a polyphonist, not at all an advocate of sequences of pretty chords. I have a horror of anything that stagnates. For me, music is not a state but rather an action…’ Among the small number of works for this instrumental combination, these belong to the very finest, and are here performed by two of today’s leading quartets: the Gringolts Quartet and Meta4 have both made numerous acclaimed recordings in the most diverse repertoire.
Recording: December 2018 at Sellosali, Espoo, Finland. Instruments: Violin by Giuseppe Guarneri ‘del Gesu'; Viola by Jacobus Januarius (Cremona 1660); Cello by Giovanni Paolo Maggini (Brescia c. 1600); Violin by Antonius Stradivarius (1699) et al.