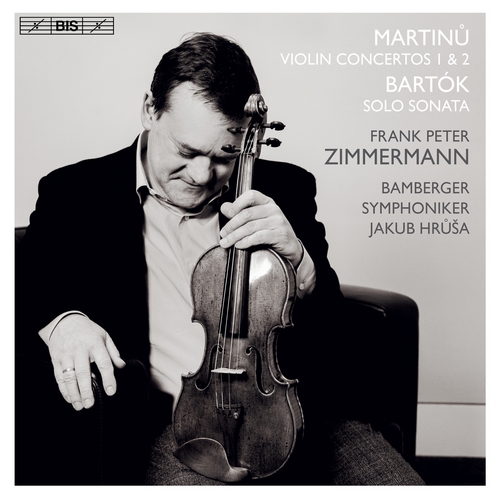 Béla Bartók:
Sonata for Solo Violin, Sz. 117
On the present disc, Frank Peter Zimmermann, one of today’s most highly regarded violinists, performs works by two Central European composers that also exemplify various currents in classical music during the period 1920-1950. Although it only received its first performance in 1973, Bohuslav Martinů’s Violin Concerto No. 1 had been composed 40 years earlier in the neo-classical idiom championed by Stravinsky. In contrast, the composer’s Second Violin Concerto (1943) is written in a more lyrical vein, partly to suit the playing style of Mischa Elman, the violinist who commissioned it. In both works Zimmermann is partnered by Bamberger Symphoniker under the orchestra’s chief conductor Jakub Hrůša, one of the leading Martinů conductors of today. The disc closes with a central work in the twentieth-century literature for solo violin, Béla Bartók’s Sonata for Solo Violin. Composed in 1944, only a year before Bartók’s death, it is a deeply personal statement which fuses the overall layout of Bach’s solo violin sonatas with Hungarian folk tradition with results that are as fascinating to the listener as they are challenging to the performer.
Recordings: 27th October, 2018 (Concerto No. 1) and 4-5 October 2019 (No. 2), at Konzerthalle Bamberg (Joseph-Keilberth-Saal), Germany; September 2019 and February 2020 at Siemens Villa, Berlin. Violin: Antonio Stradivarius, Cremona 1711, ‘Lady Inchiquin’