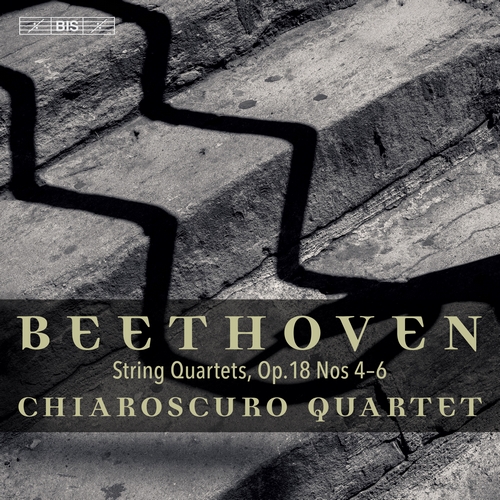 String Quartet No. 4 in C minor, Op. 18 No. 4
String Quartet No. 5 in A major, Op. 18 No. 5
String Quartet No. 6 in B flat major, Op. 18 No. 6
For a string player, Beethoven’s 16 quartets are of an importance similar to that of his sonatas to a pianist and for every composer of string quartets they remain a benchmark. The Chiaroscuro Quartet have begun their cycle of these works at the same place as Beethoven did, with the Op. 18 set which occupied him intensively for the best part of two years (1798 – 1800). The effort he put into these quartets was surely due to the fact that he had much to live up to – they would after all be measured against those of Haydn and Mozart.

Beethoven was clearly determined that the six quartets of the set should present the widest possible overview of his art. The Chiaroscuros released the first three in 2021 – a disc which was included among the finest new releases of the year in BBC’s Record Review. The present album opens with the only minor-key quartet of the six, No. 4 in C minor, which in the years that followed became Beethoven’s most popular quartet – to his growing irritation as he felt it overshadowed later works. In No. 5 in A major Beethoven follows closely in the footsteps of Mozart: its third movement and finale are in fact modelled on Mozart’s quartet in the same key (K 464), which Beethoven had copied out before he began work on his own quartet. With No. 6 in B flat major it is rather Haydn that we see hovering in the background: for instance his way of making witty capital out of the most elementary material or the rhythmic games in the third movement Scherzo.
Recording: 9th 12th September 2019 in Sendesaal, Bremen, Germany. Instrumentarium: Violin by Anselmo Bellosio c. 1780 (Ibragimova); Violin by Andrea Amati 1570 (Benedi); Viola by Willems, c. 1700 (Hornlund); Cello by Carlo Tononi 1720 (Thirion).