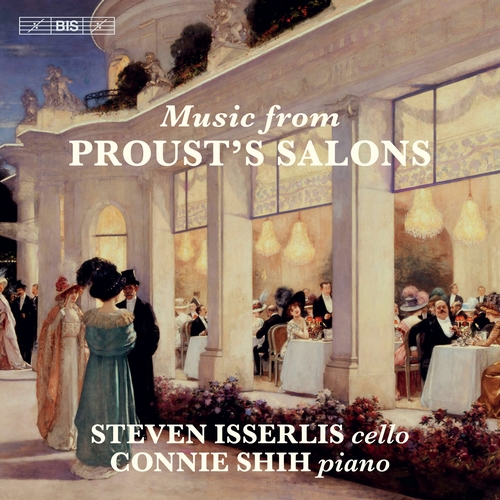 César Franck:
Sonata in A major (arr. Jules Delsart)
With this programme of music for cello and piano, Steven Isserlis and Connie Shih transport us to the world immortalized in Marcel Proust’s A la recherche du temps perdu – the Parisian high society and its glittering salons. For the composers of the time these provided a perfect platform for the introduction of new works, performed by the finest musicians in France for a sympathetic, educated and rich (!) audience. And for the music-loving Proust they offered countless opportunities to meet the composers that he so admired (and others that he possibly admired slightly less…)

The first of these to make his appearance in the programme is no one less than Proust’s one-time lover and lifelong friend, Reynaldo Hahn, with a brief set of Variations chantantes on a theme from a baroque opera. He is followed by Gabriel Fauré, whose music Proust gushed about in a letter to the composer: ‘I could write a book more than 300 pages long about it.’ Proust was less expansive about Saint-Saëns’ music even if he admired him as a pianist, but the composer’s First Cello Sonata is nevertheless the centrepiece of the programme, before Henri Duparc and Augusta Holmes make their appearance. These were both students of César Franck, whose iconic Violin Sonata in A major (here in the version for cello) closes this programme of ‘salon music’ – in the best possible sense of the term.
Recording: October 2019 at Potton Hall, Westleton, Suffolk, England. Instrumentarium: Cello: The ‘Marquis de Corberon’ Stradivarius of 1726; Grand Piano: Steinway D.