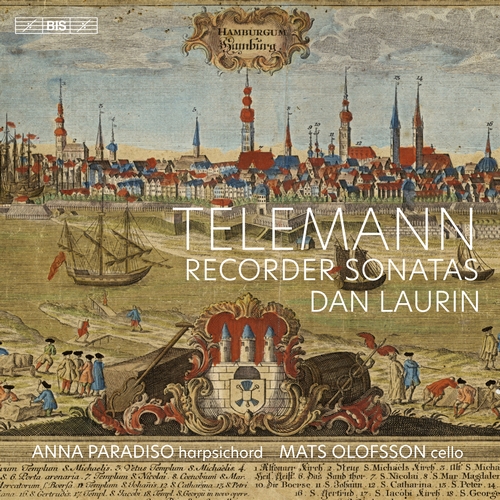 It is only now that he has set the complete sonatas on disc, however – works that he describes in his liner notes as forming part of most recorder players’ ‘musical DNA’. Performing them here with his regular chamber music partners Anna Paradiso and Mats Olofsson, Laurin revels in the wide technical and emotional scope of the sonatas as well as their stylistic diversity. In the C major sonata TWV 41:C5 Telemann looks backwards as he pays tribute to his illustrious forerunner Corelli, while the Empfindsamkeit of the Affettuoso of the D minor sonata is very much of its time – and throughout the collection there are traces of composer’s fascination for Polish folk music.
Recording: 19th-22nd April 2021 at Duvbo kyrka. Instrumentarium: Alto recorders by P. Laché, F. Morgan and F. Livirghi; Harpsichord by François P. Ciocca (2008) after Nicolas & François Blanchet (1730); Cello by Johan Öberg the elder, Stockholm c. 1765.