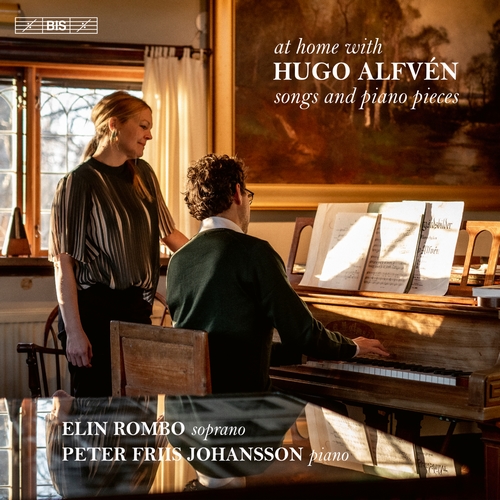 Aftonen
Sju dikter av Ernest Thiel, Op. 28
Fyra latar fran Leksand for piano
Tre Österlingsanger, Op. 22
Skärgardsbilder, Op. 17, for piano
Tvenne lyriska stämningar, Op. 8
Sa tag mit hjerte
During his lifetime, Hugo Alfvén became known as one of Sweden’s principal composers of his time, with works that struck a chord with a wide audience. As a result of his popularity, a nationwide collection was held in celebration of his 70th birthday in 1942, with the proceeds used to build Alfvéngarden, the composer’s home during his final years. Now, 80 years later, Elin Rombo and Peter Friis Johansson are releasing their tribute to Alfvén’s 150th anniversary, recorded at Alfvéngarden using the composer’s own piano.

Alfvén is primarily known for his orchestral music – including the ubiquitous Swedish Rhapsody No. 1 – and as a composer of choral music. As befits the setting, the focus of the present disc is on more intimate works, however – namely songs and piano pieces. Some of the pieces are closely related to the venue – Fyra latar fran Leksand (Four Tunes from Leksand) is a piano version of folk tunes collected from a local fiddler and Sa tag mit hjerte (‘So take my heart’), Alfvén’s most frequently performed song, was composed there in 1946 as a present to his wife.
Recording: 15th 18th June 2021 at Alfvéngarden, Tibble, Sweden. Instrumentarium: Steinway Hamburg grand model A-188, c. 1908, ebonized, originally shipped to Stockholm on 6th August 1910 (Alfvén’s own piano)