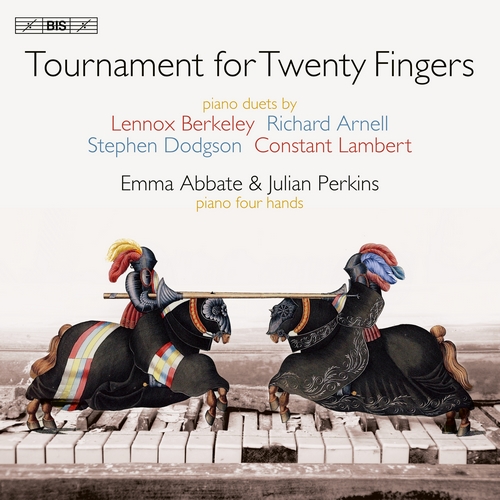 Constant Lambert:
Trois Pieces negres pour les touches blanches
Initially enjoying popularity first in Germany-speaking lands and then in France, the genre of the piano duet (four hands, one piano) went on to blossom in England during the 20th century. On this album Emma Abbate and Julian Perkins present the complete works for piano duet by each of the composers selected. Palm Court Waltz, the Sonatina and Theme and Variations from Lennox Berkeley display Gallic traits, the consequence no doubt of his studies in France and his keen interest in the music of Satie, Ravel and Poulenc. While showing an evolution in the composer’s approach to tonality, every hint of seriousness is constantly balanced by elegant playfulness and diaphanous textures.

Less well-known than Berkeley, Richard Arnell and Stephen Dodgson nevertheless contribute to the general atmosphere with their unabashedly tonal music that shows the neoclassical influence of Hindemith, Prokofiev and Stravinsky. Dodgson’s suite Tournament for Twenty Fingers, which gives its title to this disc, is especially full of fun while ending with a homage to the Czech composers Dvořák and Janáček. An outstanding talent, Constant Lambert held jazz in high esteem and his Trois Pieces – written to be played entirely on the piano’s white keys – form a high-spirited and heartfelt tribute to its rhythmical vitality and inventiveness.
Recording: 16th 17th November 2020 at St George’s Bristol, England. Grand Piano: Steinway D.