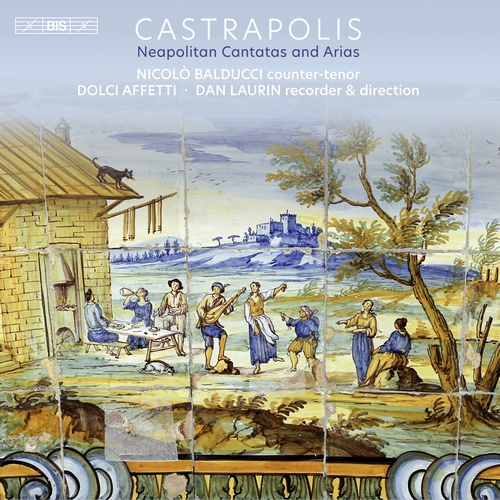 Tarantella del Gargano for voice & baroque guitar
During the 17th and 18th centuries, Naples’ fame as a musical centre attracted travellers, composers, instrumentalists and virtuoso singers alike. Among the aspiring musicians, the most highly-trained and sought-after were the castrati, promising boys aged between 8 and 12 who were subjected to an operation intended to preserve the exceptionally pure timbre of their treble voice. Forever virginal beings whose superhuman voices mesmerized their listeners they were nicknamed angiolilli, ‘little angels’, and sang in the most important churches and theatres of ‘Castrapolis’, a term coined to describe the southern capital and its high concentration of castrato sopranos.

Nicolo Balducci is one of the rapidly rising countertenors and sopranists of his generation. Together with the ensemble Dolci Affetti, directed by the renowned recorder player Dan Laurin, he here performs arias and cantatas by Hasse, Porsile, Sarro and Alessandro Scarlatti. All four composers were associated with Naples and knew how to highlight these extraordinary voices, at a time when opera and the chamber cantata represented the most fashionable musical genres both in Italy and abroad. The program is completed with a concerto for harpsichord by Domenico Auletta, with Anna Paradiso performing the solo part.
Recording: 12th 15th July 2021 at Duvbo kyrka, Sundbyberg, Sweden. Instrumentarium: Violin by W. Crijnen 1993, copy of Montagnana 1723 (Maria Lindal); French harpsichord by François Paul Ciocca, Riccia 2008, after Nicolas & Francois Blanchet 1730.