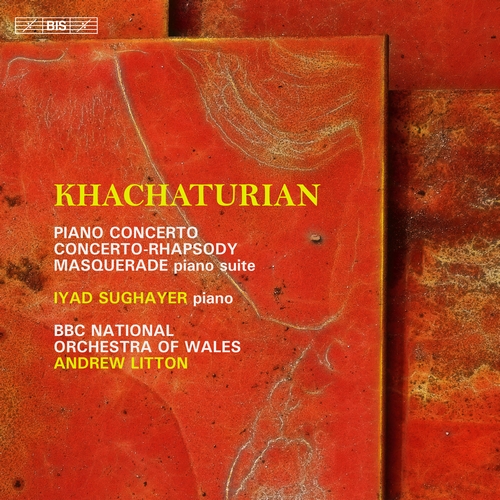 Khatchaturian: The Concertante Works for Piano

Piano Concerto in D flat major (1936)
Masquerade Suite (1944) arranged for piano solo
Concerto-Rhapsody for Piano and Orchestra in D flat major (1967)
The expressive immediacy of Aram Khachaturian's music, with its sensuous melodic writing, vibrant orchestration and rhythmic drive, resulted in a popularity equalled by few composers of his generation. Composed in 1936, the Piano Concerto was the work that established Khachaturian’s name. Cast in the customary three movements, it is scored for a sizable orchestra, with notable contributions from both side-drum and military drum in the percussion section. In the second movement there is also an extensive solo for a so-called ‘flexatone’; it is often put forward that Khachaturian in fact intended the part to be played on the musical saw, as it is on the present recording. Thirty years after the Concerto, the composer returned to the genre with his Concerto-Rhapsody for piano and orchestra. This time the score offers prominent roles for the xylophone, marimba and vibraphone, which contribute towards making this one of the composer’s most colourful works.

The demanding solo parts are here performed by the young Jordanian-Palestinian pianist Iyad Sughayer, with spirited support from the BBC National Orchestra of Wales under Andrew Litton. Sughayer made his acclaimed début as a recording artist with a disc of Khachaturian's piano works and sandwiched between the two works with orchestra he here presents the piano version of one of the composer's best loved pieces, the Masquerade Suite with its yearning opening Waltz and closing Galop.
Recording: 20th 22nd October 2021 at BBC Hoddinott Hall, Cardiff, Wales. Grand Piano: Steinway D.