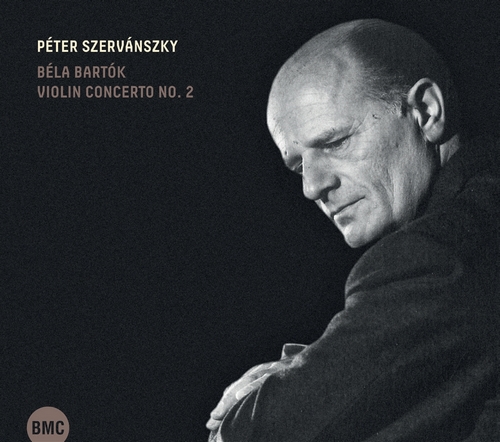 “The first presentation of the Violin Concerto No. 2 by Béla Bartók assumed a genuine and masterful form, through the matchless performance by Mr. Szervánszky. His style, his shading and the musical atmosphere he created were the perfect expression of what Bartók desired.” Pesti Hírlap, Budapest

“Péter Szervánszky gave us an interpretation of the masterpiece for violin, by Béla Bartók, such as we have not heard for many years. It was perfect and each note was a delight.” Musical Opinion, London

This is a historical recording of the live radio broadcast from the Hungarian premiere of Béla Bartók’s Violin Concerto No. 2., performed by Péter Szervánszky with the Székesfővárosi (Metropolitan) Orchestra conducted by János Ferencsik, at Vigadó concert hall, Budapest, on the 5th January 1944.

The recording owes its existence to the Babits-Makai collection of recordings, done by the pioneering Hungarian recording engineer, István Makai, of all the Bartók performances broadcast by Radio Budapest from 1936 onwards. When, due to the war, Makai was unable to obtain recording tapes anymore, he resorted to obtaining X-ray plates from hospitals on which he could record. This recording of the Violin Concerto remained in the Babits Collection and is issued here for the first time.

Bartók wrote the 2nd Violin Concerto between August 1937 and December 1938, having been requested to do so by his close friend, Zoltán Székely. Székely premiered the concerto at the Concertgebouw in Amsterdam on March 23, 1939 with the Concertgebouw Orchestra conducted by Willem Mengelberg. Székely was given the concerto’s exclusive performing rights for two years. In addition to problems caused by the deteriorating war situation, the reason that the Violin concerto was not performed in Bartók’s home country was that it took nearly two years before anyone could get in touch with Zoltán Székely to enquire about performance possibilities. The premiere was planned for 1942 but Péter Szervánszky was called up to the army and only after he was released from military service, could it finally take place on 5th January 1944.

Unfortunately this recording is the only remaining evidence of Péter Szervánszky’s playing as in the end of the 40s, like many other musicians, he looked to a new, artistically more fruitful life in South America, settled down in Peru and spent from 1950 until 1977 his active years in Lima. In 1977 he suffered a stroke and he was then brought back to live out the remainder of his life with his brothers and sisters in Budapest. He died in 1985.
Archive recording of the piece’s Hungarian premiere at Vigadó Concert