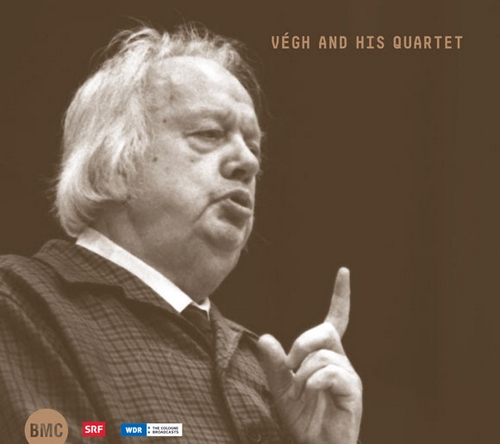 Alban Berg:
Lyrische Suite
Violinist, chamber musician, conductor and teacher, Sándor Végh (born in Kolozsvár/Cluj-Napoca in 1912), was one of the most important musicians of the twentieth century. He left Hungary in 1946, to live in France, then later Switzerland and Germany, and in the final decades of his life he made his home in Salzburg in Austria.

Végh played with the finest musicians of the century. He performed as a chamber partner to Ernő Dohnányi, Annie Fischer, Mieczysław Horszowski, Wilhelm Kemp?, Rudolf Serkin and Yehudi Menuhin. For many years he played with Pablo Casals at the legendary cellist’s Prades Festival. In 1964 Végh founded his own chamber music festival in Cervo, Italy, which is still held to this day.

From the beginning Sándor Végh was particularly drawn to the genre of the string quartet. He already had significant success as a soloist and chamber musician in the first half of the 30s, but real recognition came to him with the New Hungarian Quartet, founded in 1935. In 1938 he left the New Hungarian Quartet and soon founded the Végh Quartet in 1940. They debuted in 1942 in the Great Hall of the Budapest Music Academy with a resounding success. Almost miraculously, all four members of the quartet survived the war. They entered the Geneva International Music Competition in 1946 where the jury were unanimous in awarding the first prize to them; this victory set the Végh Quartet on their path to a global career. All outstanding musicians in their own right, Sándor Végh, Sándor Zöldy, György Janzer, and Pál Szabó played together for nigh on forty years, and all the while the quartet was at the cutting edge of the music world.

Recordings by the Végh Quartet can be found on the present album as well as, among some other chamber and orchestral pieces, on the two more forthcoming albums, completing BMC Records’ five double-disc Végh-series, on BMC 262 Végh – The Chamber Musician (planned release August 2018) and on BMC CD263 Végh in his Mother Tongue (planned release October 2018). In selecting the pieces, the main intention was to make accessible as many works as possible previously unreleased in recordings by the Végh Quartet, but a similarly important aim was that the choice of pieces should reflect the simultaneous presence of traditions and modernity in Végh’s art, and to demonstrate the wide range of the repertoire the Végh Quartet considered worthwhile recording.
Recorded at SRF and WDR in 1948-1956.