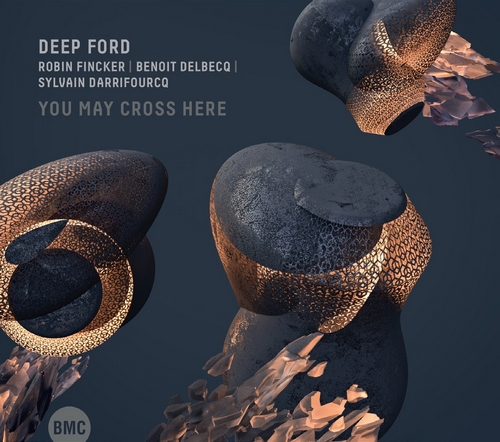 You May Cross Here

Morse
Strumming Music
Loop of Chicago
Inner Whatever
Hockneedle
Anamorphose
Grand Trunk Road
This pure music (instrumental, without either text, or subject known beforehand) seems less like a look at our world than its modification in progress. That this emanates from such an atypical line-up as a saxophone/piano/drum-kit trio has nothing anodyne about it. Deep Ford scours the furrow of two references of this little-used format, one consisting of Alexander von Schlippenbach with Evan Parker and Paul Lovens, and the more occasional trio of Cecil Taylor with Jimmy Lyons and Andrew Cyrille, not in the aesthetic sense (especially as Deep Ford differs from them in using electronic sounds, made by Benoît Delbecq) but in a matching though dissimilar bodily, intellectual and political commitment.

The miracle of an encounter does not always occur. With Deep Ford, it happened because the three men brought together here had nothing but points shared in common: an embarrassment of riches! Their way of approaching the field of jazz, for instance, marks them out, and consequently their respective careers. Inspired by Sonny Rollins and the hard boppers, it was wanting to deepen this art that Robin Fincker left for London where he ended up falling in with various English creative scenes, be they improvisatory or electronic. He forged a philosophy: to foster the sound of the ensemble rather than be a “super soloist” (which incidentally he is). Passionate about an infinity of musical genres and styles, for a quarter of a century Benoît Delbecq has been working on a synthesis of all those possible, to attain a musical poetry of rare refinement, making light of the contradictions within the unexpected juxtapositions with a fertile subtlety. Like his peers, Sylvain Darrifourcq’s approach to music takes as its starting point an exemplary artistic ethic, which has led him to change course radically several times, but he always retains his enthusiasm. If the 21st century is the century of drummers, as I believe, Sylvain Darrifourcq has secured a place as one of the most prophetic, while still adhering to the rule of the two i’s: instinct and intelligence.