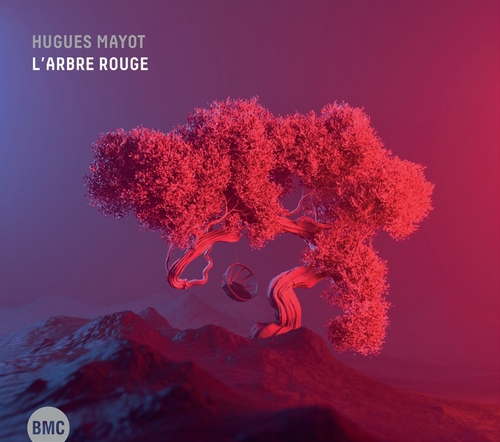 Champ D’insouciance
Inside The Mirror
La Timidité des Cimes
Les Ames Errantes
En Souvenir d’Une Terre
Songe Pastel
This is the first project of Hugues Mayot under his own name – that’s quite something, a first project under his own name in the world of jazz and improvisation, it’s like a coming out that says: you’ve heard me with Marc Ducret, André Minvielle, or Magma, but this is who I am for real. Even the title, The Red Tree, opens the imagination, as when you open a window to let the air rush in. For Hugues, it’s a reference to the idea of “roots” in music. But also a reference to the song Strange Fruit and the trees that became blood-red through having seen Afro-Americans hung from their branches. In a more contemporary context, it’s also a way of sounding the red alert on ecological threats. Or again, you can read into it what you want. For my part, it reminds me of the title of a meditative film in the style of Abbas Kiarostami, or Terrence Malick.

That figures: with The Red Tree, Hugues Mayot unites families who seem to have been divided, or even enemies, like the Capulets and the Montagues. People think that Jazz and Contemporary Music never hang out together. In reality, they have intermarried countless times, borne shared children, and share daily routines. And who better than one’s own family to implement this union? At his side to record his first CD for the BMC label he had not only his partner, the bassoonist Sophie Bernado, but also his second daughter Alma, who was curled up in her mother’s womb during the recording sessions. And the godfather of the little Bernado- Mayot is no other than the double bassist on the CD, Joachim Florent. The saxophonist has known violinist Théo Ceccaldi since 2014 when they were both in Olivier Benoît’s Orchestre National de Jazz. As for the cellist in this wind-string quintet, it’s none other than Théo’s brother Valentin.

If the music of Hugues Mayot is welcoming, it’s because it is woven at the family hearth. But family and welcome do not necessarily mean peace and indulgence in every room of the house. There are storms, crises, reconciliations too. And all of that can be found in The Red Tree. But there’s also lace, craftwork, homemade goods. Like a cocoon in which it’s good to live, even if sometimes it’s too cold or too hot. Because an artist should avoid the tepid at all costs. Even if it means getting burnt. The Red Tree remains welcoming in spite of all traces of burns, and this is far from being the least of its qualities.
Recorded at Studio Ouanne in Moulins-Sur-Ouanne on September, 2017.