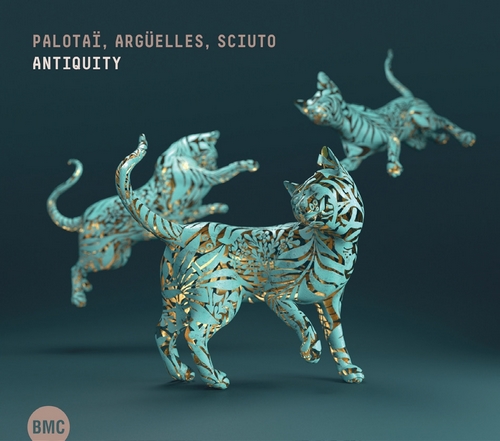 Karma Junction
The Cell
The Young Poet G.M.
Streets of Mexico
Brigida
The Seventh
Photos
5 a.m
V Game
The Rite
Summerset
Storm in Paris
Csaba Palotai’s guitar has a wild DIY feel of people who prefer setting out to arriving, who can breathe more easily in a messy cellar than in a renovated chateau. A guy whose sound has some personality, some verve, who isn’t neat and tidy, waxed smooth or with a short-back-and-sides. No, Csaba Palotai’s sound scratches, rubs, and grates. It’s a sound that can’t be domesticated: you let it kindle itself like a wood fire. And after all, guitarists (jazz ones particularly, but not just them) often like to show that they are guitarists. Csaba Palotai tries rather to make us forget that.

But then, not copying doesn’t mean not belonging anywhere. On the contrary, it even means remembering that his masters have already done things so well that it is no use doing them again. In his music, of course I hear him swerving into Marc Ribot, John Fahey, or Jeff Parker. I hear the atmosphere of Neil Young in Dead Man by Jim Jarmusch, or the scraping Ry Cooder did for Wim Wenders. I hear beach rock just as much as chamber jazz. Quite probably I hear loads of things that aren’t there and that’s why I like (re)immersing myself in it so much. But I also hear Malian blues. That of Ali Farka Touré or Boubacar Traoré. Csaba Palotai confirmed this for me: ‘Technically, what I like with African guitarists is the plurality of sound, the elegance and modesty with which they are at one and the same time in the accompaniment, and solos.’ And as often happens when one describe models, one makes a watermark portrait of oneself. Plurality of sound, elegance, and modesty, this is exactly the trinity that could define this Hungarian now based in France for more than twenty years. Not for nothing does one of his favourite maxims come from Borges: ‘for me, writing a story lies closer to discovery than to deliberate invention’: for him, the musician (and above all the improviser) discovers the sounds that he has within him, rather than creating them out of nothing. And the most striking thing is that the lineup he makes on Antiquity with the French saxophonist Rémi Sciuto and the British drummer Steve Argüelles could also be described with these three characteristics. Just as those qualities could summarize the oeuvre of the model trio in this genre (saxophone, guitar, drumkit): Joe Lovano, Bill Frisell, Paul Motian. Actually, this alloy is rather uncommon in the history of jazz, but it allows an intoxicating lightness for both players and audience. As if, bereft of the (double)bass, the music could fly off differently.
Recorded and mixed by Steve Argüelles at Plushspace, Paris in June, 2018