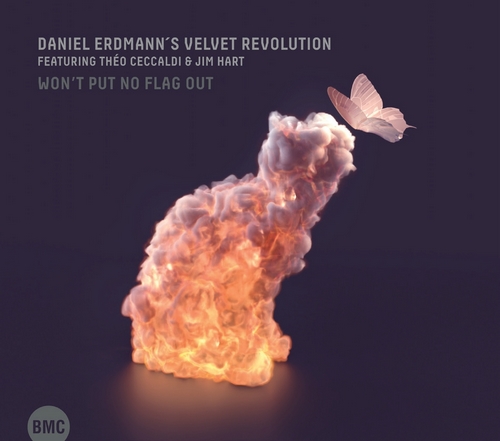 Won't Put No Flag Out

Won’t Put No Flag Out
Except the Velvet Flag
La Tigresse
Give the Soul Some Rest
Justine
Over the Rainbow
Abstract Love Song
Outcast
Bring The Moon
Kauas pilvat karkavaat
Justine, Again
The Fuel of Life
You’d have to search high and low for a band like Velvet Revolution, and it’s quite likely nothing comparable can be found. Even on paper, this combination of saxophone, violin, and vibraphone seems bold. It holds a promise of chamber-music sensitivity and multifaceted timbres, and suggests tone colour, intimacy as well as dynamism, and expressive improvisations. Particularly when such experts as Daniel Erdmann, Théo Ceccaldi, and Jim Hart are at work, musicians who have all already made a mark for themselves in the jazz landscape of Europe.

As a musician and composer Daniel Erdmann developed a characteristic sound and an unmistakable idiom years ago. The warm, earthy timbre of his tenor sax and a wide-ranging expressiveness, from clear melodies to husky modulations and flickering abstractions, are the humus for the various flowers that drive Erdmann’s band projects. He has already displayed an instinct for unusual, exciting formations many times.

The name of the band, Velvet Revolution, originally the term for the non-violent coup in Czechoslovakia in 1989, here stands as a cipher for a musical departure, a stylistic renewal that by no means negates history, but unmistakably and highly convincingly creates an individual, progressive form. The subversive power of this musical idea comes by stealth rather than with brazen crowing, which allows it to be all the more sustainable. In Germany the 2016 debut album A Short Moment of Zero G garnered with two important awards: In addition to a jazz Echo it was also awarded the Annual Prize of German Record Critics.

This time Erdmann has actually composed for his two partners in the band and their personal sound. Thanks to the concerts of recent years all three of them interact much more intuitively, resulting in even greater individual freedom and motivating the trio to intensify rhythmic qualities. Many details of the compositions were formulated jointly by the band, even in the studio.

Won’t Put No Flag Out is an album that combines compositional wit with personal expression, an immediately identifiable sound and attitude. As such, the German-French-British trio lives up to its name: Velvet Revolution.
Recorded by Viktor Szabó at BMC Studio, Budapest on 6-8 January, 2019.