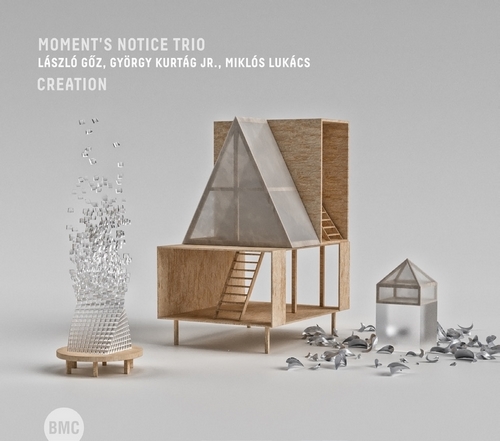 I.
II.
III.
IV.
V.
VI.
VII.
The trio was formed in 2015 at the instigation of the Chelsea Music Festival, although originally György Kurtág Jr. and László Gőz were to have been joined by Barre Phillips, a legendary bassist, and one of the most influential figures in improvisatory music in recent decades. Phillips couldn’t take part in the concert due to illness, and his place was taken by Miklós Lukács; the line-up hasn’t changed since.

The electronic sounds generated by György Kurtág Jr. give the framework for the music – or if we will, the basis – as if, sensitively reflecting his fellow musicians, he were constructing the form which two instruments dissimilar in sound and character, the cimbalom and the trombone, then proceed to fill with material. The difference in character is also due to the personalities of the performers. Miklós Lukács’s playing is imbued with frantic energy, which he is able to keep in check with dazzling mastery. László Gőz’s trombone playing, however, exudes a captivating calm, and even in the wildest of moments maintains its dignity. The personality of György Kurtág Jr. is partially concealed by the electronic sounds, and in all likelihood this is why Moment’s Notice Trio works perfectly: the three musicians complement one another not just musically, but also as people.

Of course, whether we listen to the music as some kind of story (a musical re-imagining of the creation story, for instance), or as the dialogue of three sensitive people, is entirely up to us. And who is to say it is a good idea to try and verbalize and rationalize the musical events heard on this CD? After all, for an attentive listener (spoiler alert: this music doesn’t work as background music) this CD works perfectly well as abstract music, a succession of sounds and forms. In fact, perhaps this is the only way it works.
Recorded live in the Solti Hall of the Liszt Ferenc Academy of Music on 20 October, 2017.