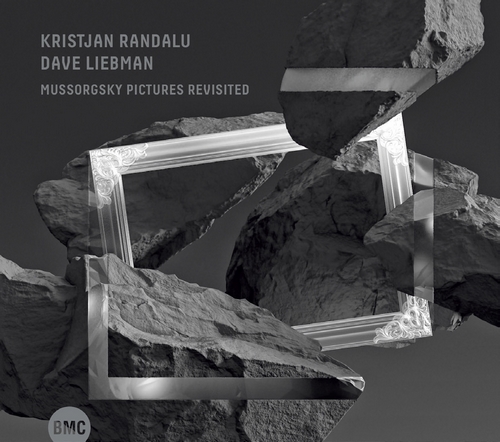 Promenade I
Gnomus
Promenade II
Il Vecchio Castello
Promenade III
Les Tuileries
Bydło
Promenade IV
Ballet of the Unhatched Chickens
Samuel Goldenberg and Schmuyle
Promenade V
Limoges – The Market
Catacombae
Cum Mortuis in Lingua Mortua
Baba Yaga
The Heroic Gate
Hailed as the greatest Russian classical piano composition, Mussorgsky’s Pictures at an Exhibition takes us deep into the labyrinth of the human psyche in the clever disguise of program music it’s no wonder it has been an endless source of inspiration for creative musicians in the last 150 years. Estonian pianist Kristjan Randalu whose playing was described as an “unnameable exotic land” by Jazz Times revisits the cycle with an unlikely ally: veteran jazz saxophone legend Dave Liebman. While staying faithful to the original in spirit and structure, Randalu and Liebman reimagine and recreate each musical painting anew with immediacy and fervour, mixing generous improvisations into the Promenades, and carrying Mussorgsky’s music well into the 21st century.

Mussorgsky’s original classical work for piano takes about half an hour to perform. Randalu did not add any new parts, but followed the original structure exactly, only transformed the Promenades, the short interludes between the movements, into separate pieces, thus the transcript became about twice as long as the original. Inspired by their previous collaborations, Randalu composed it specifically with Liebman in mind. His goal was to set up a musical ambience where Dave could add whatever he likes to, and where also both of them could create something together. There are parts that are more structured and, in fact, almost completely follow the original, only with minor changes in rhythm or harmony, however, the Promenades have become more open and spacious units, allowing the artists fine settings for improvisation.
Recorded by Viktor Szabó at BMC Studio, Budapest on 19-20 April, 2019.