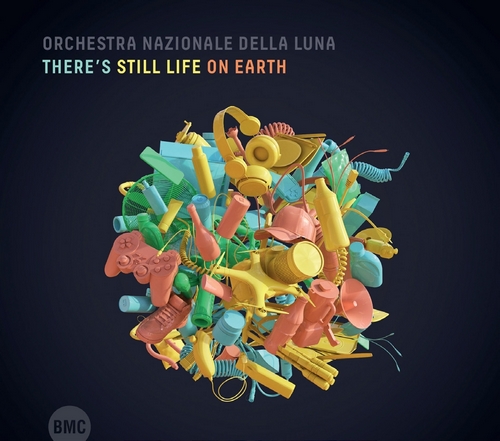 There’s Still Life on Earth
Kääpikkäät
Al Bahr
Ecocracy
Melting Poles
Myrkkysienikeitto
Internal Duality
Al Qamar
Prophetes
Out of Gravity
Cannon Canon
There’s Still Life on Earth
Facing what our world is becoming, the four members of the Finnish-French-Belgian Orchestra Nazionale Della Luna felt that their music had to join the global appeal for deeper consciousness and more urgent action. There Is Still Life On Earth – published by BMC Records – presents an exciting fusion of traditional and futuristic instruments, Middle Eastern and Western scales, Arabic rhythms and swing, bansuri and Moog synthesizers, illustrating that mankind has reached a turning point. Their contrasting sound paintings are outlined in one moment by the crystal clear sea and weightlessness, in the other, melting ice sheets and desertification.

Orchestra Nazionale Della Luna takes a stand about ecological crisis on their second album, There Is Still Life On Earth on BMC Records. The compositions by the Finnish pianist and Moog player Kari Ikonen and the Belgian saxophone and bansuri player Manu Hermia encourage us to face the acts of mankind and our own responsibility. Their sound forms a protective bubble that allows for the deepest self-reflection. In this isolated world, the air, sunlight, fertile soil and wind take a musical form, but as we look outside, the soundscape of melting ice sheets and deserts greet us. Eastern and Western musical dimensions morph into each other organically; classical Western scales turn into microtonal Arabic scales on the Maqiano, a piano-attachable device developed by Kari Ikonen. Other times, however, the transition of the two worlds is like transposing a melody from one key to another: while the melody remains familiar, the loss of the harmonic center calls into question all the knowledge we take for granted.
Recorded by Viktor Szabó at BMC Studio, Budapest on 19-20 June, 2019.