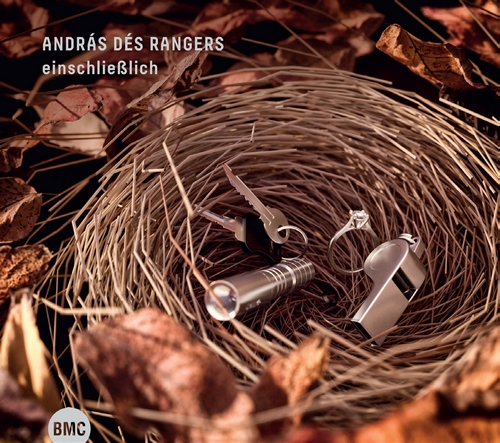 András Dés, János Ávéd, Márton Fenyvesi, Mátyás Szandai
Wykonawcy
András Dés Rangers:
János Ávéd, tenor saxophone
Márton Fenyvesi, acoustic guitar
Mátyás Szandai, double bass
András Dés, objets trouvés
Cautious Party
Interplay I. – Backwards
Music for Brokers
Interplay II. – Onwards
Life Sings On
Pan
Ghost Town
Dóra’s Song
Long Distance Relationship
Epilogue
Percussionist András Dés was guided by musical curiosity when he decided to record his latest album, einschließlich in the woodlands of the Bakony hills with the members of his quartet, Rangers. Nature became the producer of the record, and serendipity – one of the main driving forces of jazz – took the key role. Dés left his instrument at home and played the objets trouvés of the forest instead: trees, stones, leaves, pine cones, snails’ shells, the ground, and of course he used his own body as an instrument. Playing in the middle of the forest amplified the quartet’s ensemble playing to a particularly high standard, masterfully captured on this album released by BMC Records.

Legend has it that in the 19th century, birds were singing the tunes of Chopin in the forests of Germany because music lovers were so keen on teaching classical melodies to their feathered friends. Even though we don’t expect songbirds to know the classical repertoire anymore, percussionist András Dés surmised that they would play an important role on an album written by nature and chance. Instantaneous risk-taking is vital for a jazz player, so Dés decided not to bring any instruments to the session with his quartet, Rangers. Instead, he played the objets trouvés of the forest: trees, stones, leaves, pine cones, snails’ shells, the ground, as well as using his own body as an instrument. Being exposed to nature also heightened the musicians’ responsiveness to each other’s playing, elevating the ensemble playing of guitarist-producer Márton Fenyvesi, saxophonist János Ávéd, bass player Mátyás Szandai and percussionist András Dés to a particularly high standard, masterfully captured and presented on this album by the recording engineer, Viktor Szabó. Even though Dés says his album was not made with social critique in mind, the listener cannot escape the thought that this music was created in a forest at the eleventh hour as a memento of the final minutes before a great collapse.
Recorded by Viktor Szabó in the woods of Bakony (Németbánya) on 8-9 August, 2019.