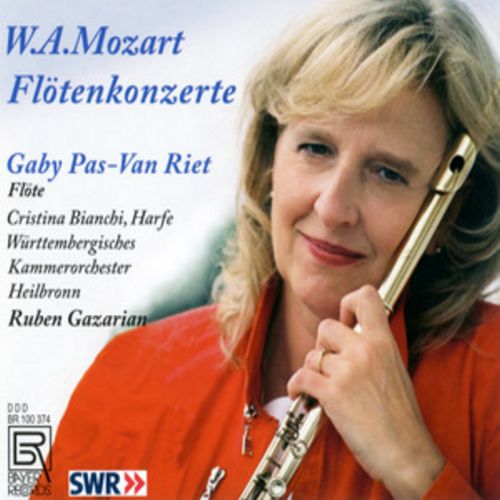 Bayer Records - BR 100374
Kompozytor
Wolfgang Amadeus Mozart (1756-1791)
Wykonawcy
Gaby Pas-Van Riet, flute
Cristina Bianchi, harp
Wurttemberg Chamber Orchestra of Heilbronn / Ruben Gazarian
Flute concerto no. 1 in D major, KV 313
Flute concerto no.2 in G major, KV 314
Concerto for flute, harp & orchestra in C major, KV 299
Gaby Pas-Van Riet´s solo career spans Europe as well as the USA, Japan and the Middle East and encompasses the entire flute repertoire. She has achieved great renown with world premieres of many modern works (e.g. H. Lachenmann), some of which are dedicated to her, and also with the rediscovery and performance of long-lost romantic flute concerti (Waelput, Benoit). Gaby Pas-Van Riet is principal flute of the SWR Radio Symphony Orchestra in Stuttgart, a member of the Bayreuth Festival Orchestra, Professor of flute at the University of Music and Theatre of the Saarland (Germany), and Guest Professor at the University of Music in Antwerp. Since the beginning of the 2000-2001 season she has been a regular guest as substitute principal flute of the Berlin Philharmonic Orchestra, working with conductors such as Abbado, Harnoncourt, and Salonen, to name a few.

She has won prizes in many major music competitions, such as the ARD in Munich, and can be heard on numerous recordings of chamber music and solo works.
Rec.date: 2008 & 2009 (live)