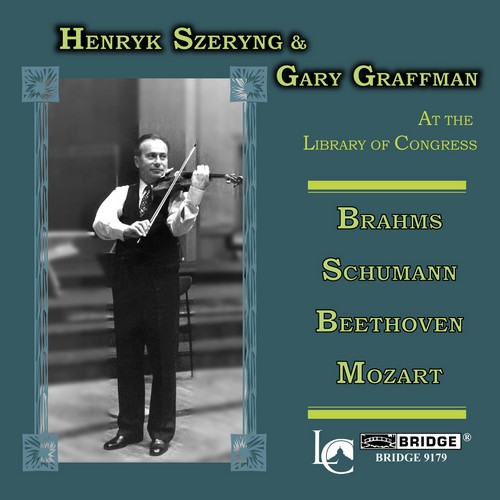 Wolfgang Amadeus Mozart:
Rondo - Allegro, from Sonata in C Major, K. 296
This disc is the second Szeryng/Graffman disc Bridge has released, and is taken from concerts that the duo gave at the Library of Congress in 1970 and 1971. In his review of the first Bridge CD (a Beethoven recital- BRIDGE 9165) critic Jed Distler writes: “In his autobiography, pianist Gary Graffman warmly recalls his chamber music collaborations with violinist Henryk Szeryng. Judging from these Beethoven performances, the Szeryng/Graffman partnership yielded exciting results.” And indeed, the exciting results are continued in this collection. The disc begins with the duo’s superbly wrought recording of Brahms’s G major Sonata- a reading that is notable for its precision and involvement. This is chamber music-making at its best, with both artists playing off each other with inspired spontaneity. The Schumann A minor Sonata performance, called by critic Irving Lowens in The Evening Star “the high point of the evening”, is one of almost savage intensity and impassioned music-making. Szeryng announces two encores from the stage- movements by Beethoven and Mozart, and a cheering audience sends the artists home with ‘Bravos’ ringing in their ears.