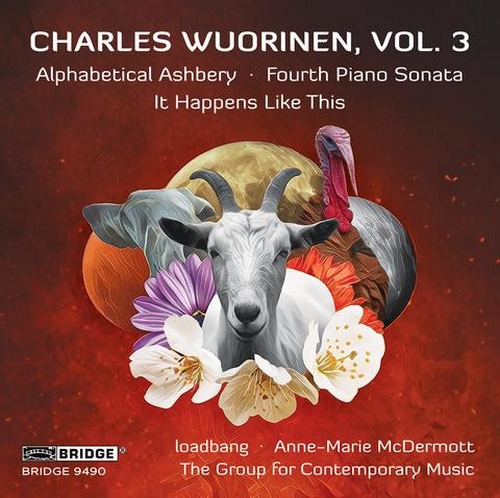 Alphabetical Ashbery (2013)
Fourth Piano Sonata (2007)
It Happens Like This (2010) (Cantata for Four Singers and Twelve Players on Poems of James Tate)
Charles Wuorinen has always been comfortable in a range of genres, embracing the traditional forms of opera, symphony, or string quartet as readily as he accepts the challenge of composing for the unusual combinations which have become a second norm since Pierrot Lunaire. Nor has any particular focus dominated any period of Wuorinen's nearly sixty-year career: his eight symphonies span more than fifty years, his piano concertos forty. He has written everything from piano bagatelles to ballets, a Mass setting, eight symphonies, and three operas. This new album features the latest and most traditionally structured of Wuorinen’s four piano sonatas, performed by virtuoso pianist, Anne-Marie McDermott, as well as two vocal works setting poetry by two of America's greatest modern poets, John Ashbery and James Tate.