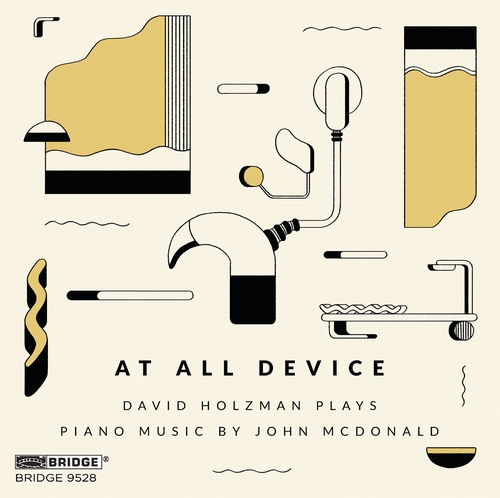 McDonald: At All Device

I have known John McDonald for almost two decades. At first, he was a generous colleague, joining with Joel Gordon to help bring many of my cd’s into existence providing the space to record at Tufts University, editing, and a stayover at his house for these multi-day events. By the second such event, he was already becoming a friend and soon a close and trusted friend.

I began to know him as a composer about a decade ago, when I began to ask for, and receive, unbidden, compositions all colorful characterstucke clearly written by one pianist for another. It was only two years ago, when I started to work on this cd, that I began to fully grasp the variety and complexity of his works. And only after the two-year journey of learning, performing and recording was complete did I have the pleasure of seeing John’s personality reflected in his music.

The earlier works in this recording capture Holzman's physical approach to the piano, with intense involvement of arm and shoulder. The more recent works were written as Holzman was struggling to perform while using hearing devices.