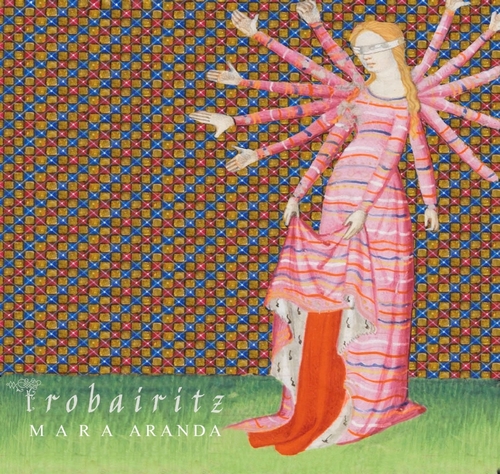 Bieris de Roans. s.XIII:
Na María, pretz e fina valors
Clara d´Anduza. s.XIII:
En greu esmay eten greu pessapen
Azalaís de Porcairagues. s.XII:
Ar em al freg temps vengut
Anonimous Instrumental. s.XIV:
Principio di Virtu
Beatriz de Dia. s.XII.:
Fin ioi me don´ alegranssa
Beatriz de Dia.s.XII:
Estat ai en greu cossirier
Alaís, Iselda i Carenza. s.XIII:
Na Carenza al bel cors avinen
Beatriz de Dia. s.XII:
A chantar
Anonimous Catalán. s.XIII.:
Quant ay lo mon consirat
Mara Aranda is celebrating in 2020 -30 years on the stages- with a repertoire full of universal content and repeated throughout the ages 'by mother's mouth'. She will be accompanied by the talent of four women musicians who will perform original texts from the 12th and 13th centuries by medieval female singer-songwriters, called Trobairitz, and others whose authors have not transcended and in which the authorship of women is not dismissed; women who saw in anonymity a way out to deliver to history and future society a chronicle of feelings, affections and vicissitudes of their time and that are not far from what any individual, regardless of gender, could be made to feel, feel, think or experience today, telling the repeated story of Humanity. This is a tribute to all those women and men who from the present recognize and admire with the magnitude that corresponds, the courage and importance of these testimonies. In that medieval society there were educated women, such as the Trobairitz, who played an active part in the cultural and literary life of southern France, where Occitan was the language of poetry and which reached Italy and Germany in the north and Catalonia and the Balearic Islands in the south, as far as Valencia. Beyond the image that clergymen and troubadours built on her, the medieval woman did not limit herself to acting as a witch, saint or prostitute. In her real life she played the most varied characters, just as she did yesterday and today. "To cry, to speak, to spin, is what God granted to women." Following Aristotle, the secular branch considered women as failed men "perfidious and fetid", "an unfathomable source of all sins". And the virtuous woman, "stranger than the phoenix or the black swan". In the 15th century, at the end of the Middle Ages, Cristina de Pizán, probably the first feminist in history, denounced inequality towards women and encouraged them to fight by educating themselves.
Music: Mara Aranda