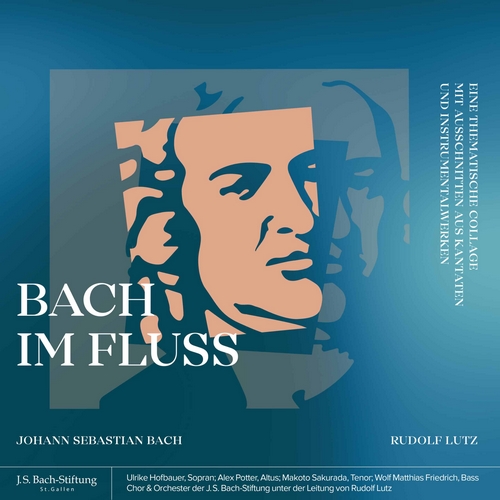 Bach Stiftung - C 089
Kompozytor
Johann Sebastian Bach (1685-1750)
Wykonawcy
Ulrike Hofbauer, soprano
Alex Potter, countertenor
Makoto Sakurada, tenor
Wolf Matthias Friedrich, bass
Chor & Orchester of the J.S. Bach-Stiftung / Rudolf Lutz
A thematic collage of selected movements from cantatas and instrumental works
compiled by Arthur Godel and Rudolf Lutz
Who, upon hearing Bach’s music, can fail to feel its powerful rhythmic momentum – indeed, the pulse of time itself? Yet behind this striking of the hour, there is a sense of eternity – a timeless sea from which all waters spring and whence they return, as was the worldview in Bach’s era.

The “Bach im Fluss” (Bach and the river of time) programme was first conceived for the annual “Wort & Klang” (Word & Sound) concert cycle, whose 2011 leitmotif was “Strömungen” (currents). At the same time, it also formed part of the 25-year project of the J.S. Bach Foundation to perform and record the entire vocal oeuvre of Johann Sebastian Bach. The work was performed in the expansive halls of the Sitterwerk, a former industrial plant in St. Gallen. For centuries, the Sitter river powered machines at the site; today, it is a place of artistic creation, where bronze sculptures are cast for artists and museums throughout the world. The old boiler house is now home to monumental, archaic sculptures by Hans Josephsohn (1920-2012): busts and human figures that exude an out-of-time quality. The works evolved over a long process of creation and, time and again, destruction - never quite complete, as if awaiting their day of redemption.

The artistic concept for the programme was twofold, drawing on both a musical-rhythmic and a theological-textual idea.