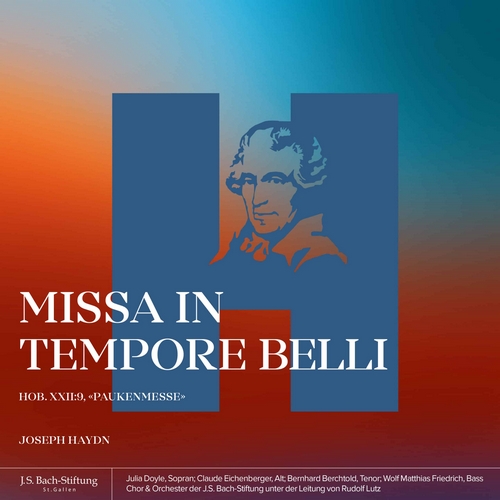 Bach Stiftung - C 090
Kompozytor
Joseph Haydn (1732-1809)
Wykonawcy
Julia Doyle, soprano
Claude Eichenberger, alto
Bernhard Berchtold, tenor
Wolf Matthias Friedrich, bass
Chor & Orchester of the J.S. Bach-Stiftung / Rudolf Lutz
Missa in tempore belli
(Mass in Time of War)
The late career of Joseph Haydn numbers among music history’s more astonishing stories. At the beginning of the 1790s, after decades of composing in artistic seclusion at the Burgenland-Hungarian border, Haydn, aged almost sixty and recently pensioned after a change of rulers in the House of Eszterhazy, stepped into the spotlight of European society. Two concert tours to the musical centre of London brought Haydn not only overnight fame but also wealth; with his late, large orchestral symphonies and two new oratorios, The Creation (1798) and The Seasons (1801), the composer, long considered the quiet innovator of the sonata, the string quartet and other instrumental genres, secured both international fame and lasting influence on future generations. In contrast to his friend Mozart, whose two main liturgical works (Mass in C Minor and Requiem) remained fragmentary at his early death, Haydn was also blessed with the opportunity of completing an outstanding cycle of mature sacred works. Between 1796 and 1802, Haydn produced six Masses that were, at least in part, written as a new commission at the Eisenstadt Court for the Eszterhazy family, his longstanding patrons. Beyond celebrating the name day of the resident princess, Maria Hermenegildis, other factors likely also informed the evolution of this sacred swan song. This is suggested by both the various performance locations of the Masses (in our case the Piarist Church in Vienna) and the explanatory additions in their titles; for instance, the name “Missa in tempore belli”, which Haydn himself chose, almost certainly refers to the 1796 Napoleonic invasion of Austria’s Erblande territory. Moreover, Haydn’s individual, confident, clever – at times downright brazen – treatment of the text speaks for a connection that goes beyond the dutiful completion of a commissioned work – a level of personal identification that can fairly be compared with the creative impulse of Johann Sebastian Bach.
Live Recording. Performed on period instruments.