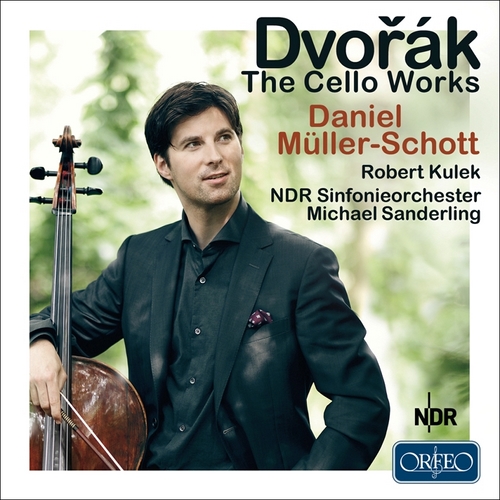 Cello concerto in B minor op. 104
Romantic Pieces op. 75
Silent Woods op 68/5
Rondo in G minor op. 94
Slavonic dance op. 46/8
Songs my mother taught me op. 55/4
Antonín Dvorák’s Cello Concerto is one of the absolute masterpieces of the genre, and every world-class cellist naturally takes it into his repertoire. This is also the case for Daniel Müller-Schott, who will be performing it in the great concert halls of Europe in 2014 and in the Lincoln Center in New York: thus in the very same city where Dvorák worked as conservatory director and where he wrote the concerto.

Dvorák began his work in passionate, stormy mood, but completed it in lyrical, elegiac vein under the shadow of the illness and death of his sister-in-law Josefina, who had been his own first love.

Müller-Schott’s new recording also includes several chamber music works and arrangements that offer insight as to how Dvorák gradually accustomed himself to the cello, up to the point when he composed his concerto in 1894-5. There is the catchy 'Rondo' that Dvorák wrote in 1892 for a chamber music tour, and 'Silent Woods', an arrangement made for the same tour, heard here in Dvorák’s own orchestral versions. Together with the pianist Robert Kulek, Müller-Schott has also recorded arrangements of the four Romantic Pieces op. 75 and of 'Songs my mother taught me' from the Gypsy Songs cycle. The latter is perfectly suited to the cello’s cantabile character and Daniel Müller-Schott’s interpretation.

“Müller-Schott, with his thoughtfully varied articulations and tone colours, digs...deeply into the concerto's expressive detail, in particular bringing out the sense of yearning that's such a powerful aspect of the music.”

“Muller-Schott has a clear, warm but not overwhelming tone, and the musicianship to work closely with Michael Sanderling and the orchestra...Muller-Schott is a fine artist, and this is an attractive assemblage of some of Dvorak’s most charming music as well as one of his masterpieces.” [February 2015, International Record Review]