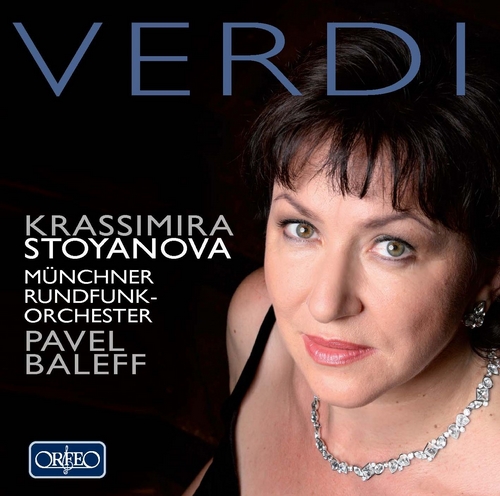 1 Aida Ritorna vincitor! 6’44
2 Il trovatore Vanne… Lasciami – D’amor sull’ali rosee 6’07
3 Giovanna d’Arco Qui! – O faticida foresta 4’39
4 Un ballo in maschera Morro, ma prima in grazia 4’08
5 Luisa Miller Tu puniscimi, o Signore 2’56
6 La traviata Teneste la promessa – Addio del passato 6’54
7 Il trovatore Tacea la notte – Di tale amor che dirsi 4’50
8 Don Carlo Non pianger, mia compagna 4’10;9 La forza del destino Pace, pace, mio Dio 5’18
10 Don Carlo Tu che le vanita 10’43
11 Otello Canzone del salice – Ave Maria 16’51
The year of Giuseppe Verdi’s 200th birthday might have come to a close, but his presence on opera house programmes has as little to do with such commemorations as does his general popularity. One of the most renowned Verdi sopranos today – whose fame began well before the “Verdi year” and will last long after it – is Krassimira Stoyanova, who now presents her newest solo CD with arias by the composer. Some of these roles she has already sung all over the world, while others she will be singing in the coming years. From Otello we naturally find Desdemona’s “Willow Song” and “Ave Maria”, since this is her most famous role. As Desdemona she has moved and enthused audiences and critics alike from Vienna to Barcelona and Chicago. In Verdi’s operas after Schiller, Don Carlo and Luisa Miller, Krassimira Stoyanova gave her celebrated debuts as Elisabetta and Luisa Miller at the State Operas of Munich and Vienna respectively. Since then she has become especially known both for her ability to shape a perfect, broad melodic arch full of expression, and for her emphatic characterisation of these two women, caught as they are between love and duty. The two “Leonoras” in Verdi’s Il trovatore and La forza del destino make more dramatic demands on the voice, and Krassimira Stoyanova is approaching these roles in a manner both prudent and composed; she has not yet taken the latter completely into her repertoire. The dates for her debuts as Aida in the eponymous opera and as Amelia in Un ballo in maschera have now been fixed, and she can also be heard in excerpts from both roles in this new CD with the Munich Radio Orchestra under Pavel Baleff. The roles that Krassimira Stoyanova has sung less frequently up to now (though no less successfully) include the title roles of Giovanna d’Arco and La traviata, excerpts from which can also be heard on this CD. Despite the differences between these roles, one marvels once again at Krassimira Stoyanova’s artistry, at her unmistakeable, unmannered, unostentatious, refined soprano voice, as she does justice both to the girlishness of Verdi’s Joan of Arc and to the wrenching farewell offered us by the dying Violetta Valéry.