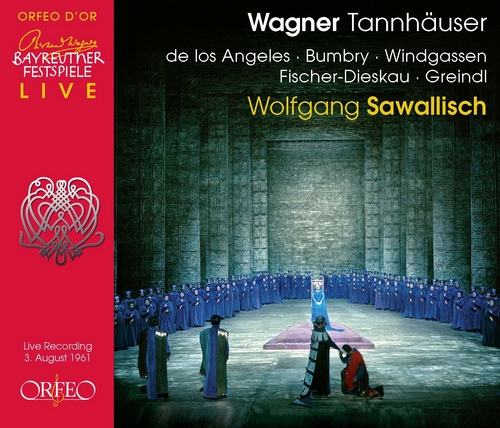 The first performance of a series, they say, isn’t always the best. But this basic tenet of the theatre also deserves closer examination with the benefit of hindsight. At first glance, connoisseurs of the Bayreuth Festival and its recording history will think there can be little that is new about a live recording of the Bayreuth Tannhäuser that Wieland Wagner directed in 1961, conducted by Wolfgang Sawallisch. It was only in the following Festival summer that Sawallisch’s achievements on the rostrum were particularly well documented in audio form, with Wolfgang Windgassen as the title hero and, alongside him, Grace Bumbry in her international breakthrough role as the “black Venus”. But in 1961, Victoria de los Angeles sang Elisabeth and Dietrich Fischer-Dieskau (at his last Bayreuth Festival) the role of Wolfram. As the critics noted, the opening night suffered not just from what were presumably the usual first-night tension and nerves, but also from the adverse, rainy weather that dogged the first week of the Festival and that meant the common cold was doing the rounds. The discovery in radio archives of a Tannhäuser from the first of the subsequent performances is thus a real find, and it is being released on CD in 2014 in the series of historical recordings of the Bayreuth Festival. By a stroke of luck, all the protagonists were on form on the evening of 3 August 1961, as we can now hear for the first time. This allowed Wolfgang Sawallisch to maintain his stringent reading of the Tannhäuser score. His tempi were taut, but still allowed for a decisive hint of elasticity, with slight rubati and adjustments according to the phrasing of the individual singers. As so often in a cast that was assembled in large part by Wieland Wagner, we can here discern a balance between lyrical voices and a subtle, psychologically precise art of characterisation – which is particularly the case with Victoria de los Angeles, who sings the role of Elisabeth in a songlike manner, without any undue intensification towards a youthful-dramatic vocal interpretation of the role (which some of her colleagues have taken to excess). Dietrich Fischer-Dieskau outdoes himself once again as Wolfram, and the “parting couple” at the outset – Grace Bumbry and Wolfgang Windgassen – here achieve a perfect balance of love’s lust and sorrow (perhaps better than they ever had before, or ever would again). Sometimes a second attempt is worth more than twice the trouble.