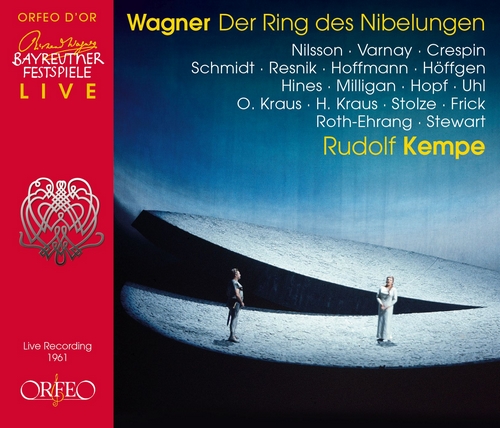 Rheingold
Die Waküre
Siegfried
Götterdämmerung
Richard Wagner’s Ring had been performed in the highly reduced version by Wieland Wagner at the eight Bayreuth festivals since the re-opening of the theatre in 1951, it seemed in 1960 that the time had come for a new production, a task placed in the hands of Wieland’s brother Wolfgang. Although his version –still spaRing in comparison with today’s staging concepts –depended on its use of lighting and special effects, he took the opportunity to bRing in a complete musical overhaul: direction of the production was given to the 48-year-old conductor Rudolf Kempe. In 1951 Hans Knappertsbusch had shared the task of conducting the Ring with Herbert von Karajan; in 1956 Knappertsbusch took sole charge of Wieland Wagner’s production for the remaining three years. The 1956 production of the Ring appeared on the ORFEO label, C 660513. The conductor from 1952 to 1955 was Josef Keilberth, alternating in 1953 with Clemens Krauss (ORFEO C 809113). With all due respect to Knappertsbusch, who in 1958 turned 70 years old, and retrospectively perhaps to Keilberth too, the reaction to the refreshingly new musical direction of the the Bayreuth debutant from Saxony was unanimously positive and remained so for the five years that Kempe conducted the orchestra; indeed, the impression was retrospectively reinforced (one critic many years later compiled a now famous, comprehensive and comparative discography, citing a recording of Kempe’s Bayreuth Ring as the best recording ever). Originally trained as an oboist, the Dresden-born Kempe began conducting in the 1930s and after the war became director of the Dresden, and then of the Bavarian state opera companies. In the course ofthe 1950s he enjoyed great success as a guest conductor at London’s Covent Garden (including Wagner’s Ring ), and in 1961, the second year he conducted the Ring in Bayreuth, he assumed direction of the Royal Philharmonic Orchestra. His well-rehearsed finely-tempered “neutral” Wagner style that eschewed ostentation may have surprised some observers at the time but it proved that the Ring remained a great and impressive work without resorting to excess.

While a younger generation was taking over on the conductor’s rostrum at the new Bayreuth, a new generation of singers was also finding its feet in the great Ring roles. In the new production, tenor Gerhard Stolzein the role of Logewas able to build on his finely acted, declamatory portrayal of Mime that hehad taken on in 1957. Regine Crespin, who had successfully taken the role of Kundry in Parsifalin Bayreuth since 1958 and only appeared in the Ring that one year, imbued the role of Sieglinde with the touching emotionality of her highly dramatic sopranovoice, and gave a persuasive reading, with the young Fritz Uhl playing her loving brother. Uhl, who in his turn had been singing in Bayreuth since 1957, took over the role of Siegmund in 1961 at the age of 32 from Wolfgang Windgassen; for the remaining four years under Kempe: his performance earned plaudits for his rhythmically meticulous performance style and brilliant vocal quality as well as for his intelligent acting. While in the years before and after Kempe’s Ring cycles it was Wolfgang Windgassen who took the role of Siegfried, tenor Hans Hopf brought a fresh approach to the role duRing Kempe’s tenure, and was highly praised for his almost Italianate vocal style and wide range of timbre.

The new Ring concept also included changes to the main role cast list, notably for Wotan and the Wanderer. One case in point is Jerome Hines, who played Wotan in Rheingoldand The Valkyriein 1961, with the Canadian bass James Milligan as the Wanderer in Siegfried; sadly, Milligan died that same year at just 33 years of age, though he had already received international accolades for his passionate reading of the role and was touted as an artist of great promise, both for his vocal skill and his stage presence –and in this particular distribution of roles, an exciting complement to Wotan, played by the more introverted American bass baritone, Jerome Hines.

Among the other singers of note –such as Regina Resnick, who descended (only in the vocal sense) from Sieglinde in 1953 to Fricka, Otokar Kraus as Alberich from 1960 to 1963, and an impressive reading of Fafner in all five Kempe years given by the bass Peter Roth-Ehrang, who died far too young –we must not forget to mention Brünnhilde. While Astrid Varnay achieved the high expectations placed in her from a vocal and acting point of view in The Valkyrie, Birgit Nilsson exceeded them all in Siegfriedand Twilight of the Gods. Her Bayreuth debut in that role came only when Kempe gave his Ring cycle there, but Brünnhilde became her “true” role and she was immediately acclaimed by all as an exceptional singer, perfect for the role, thanks to her flawless vocal sound production with its dramatic clout, all delivered in perfect intonation, and her seemingly just about inexhaustible powers.
Live Recording 1961