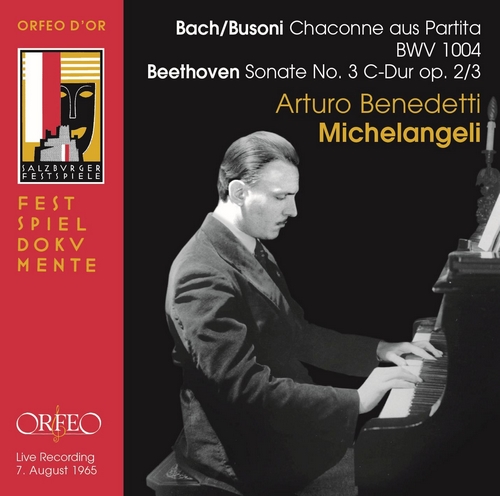 Ludwig van Beethoven:
Sonate No. 3 C-Dur, Op. 2/3
In 1965 the legendary Arturo Benedetti Michelangeli, then 45, made his first and last appearance at the festival. Just how exceptional the appearance of this reclusive artist was can be seen in the fact that he strictly and successfully forbade the recording and broadcast of the second half of the concert. It is uniquely appropriate that one of the few Bach pieces from his publicly performed repertoire should be the Bach Chaconne for Violin – an instrument that Benedetti Michelangeli had himself studied and that he said he sought to imitate with his own highly sophisticated piano technique. The work is heard here in the transcription by Ferruccio Busoni. It’s intriguing once again how different the meticulously thought-out interpretations of his very limited public repertoire are, and striking how forcefully and not at all reservedly the Maestro sometimes permitted himself to play. The technically dazzling Beethoven Sonata op. 2 No. 3 is performed here with a perfection and at the same time a gutsy virtuosity that is quite disarming.
Live Recording - 7. August 1965, Herausgegeben von den Salzburger Festspielen, 3. Solistenkonzert, Mozarteum