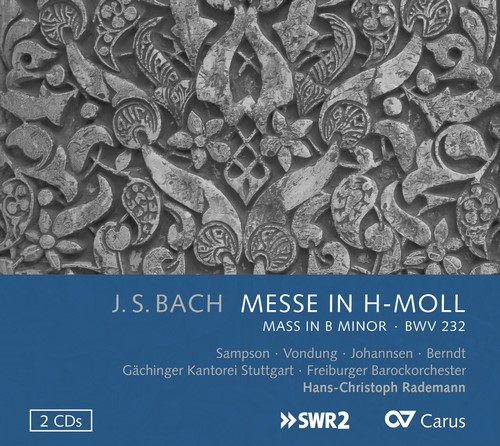 Bonustrack:
Domine Deus, Quoniam tu solus Sanctus - versions based on the autograph score
Sanctus, Pleni sunt coeli - versions from 1724
The Mass in B minor by Johann Sebastian Bach is one of the central sacred vocal compositions in the history of music. Hans-Christoph Rademann, as successor of Helmuth Rilling, has now devoted his first CD as director of the Internationale Bachakademie Stuttgart to this outstanding work and, together with the Gächinger Kantorei Stuttgart and the Freiburger Barockorchester as well as renowned soloists in the field of historically informed performance practice, has set new artistic standards.

Although the Mass in B minor is one of Johann Sebastian Bach’s most frequently performed vocal works, it continues to present performers and scientists with new enigmas and problems. Directly after his death, the original manuscript was massively changed by his son Carl Philipp Emanuel; changes which, until today, pose many questions to researchers.

The present new recording rigorously follows – in the Kyrie and Gloria – Bach’s own meticulously configured “Dresdner Stimmen” [Dresden parts] and is thereby based, for the first time, exclusively on the musical text that emanated from Johann Sebastian Bach’s pen. Furthermore, additional movements with marked deviations from today’s familiar version have been made accessible as variants in the bonus material. The recording is based upon the new edition by the renowned Bach and Mozart scholar Ulrich Leisinger in cooperation with the Staatsbibliothek zu Berlin and the Bach-Archiv Leipzig, who also prepared the introduction in the CD booklet.