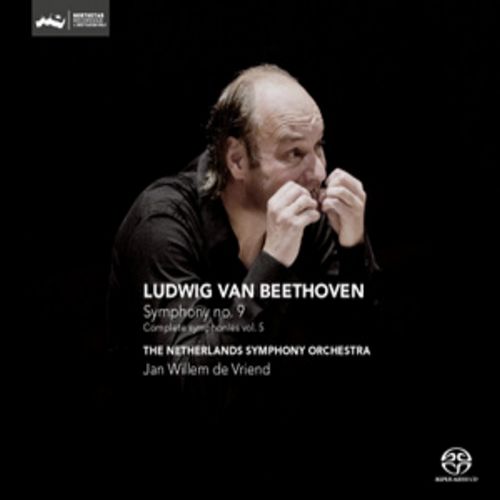 This is the last CD in the series of the complete Beethoven Symphonies performed by Jan Willem de Vriend an his Netherlands Symphony Orchestra. With every CD in this volume De Vriend has shown his fresh view on Beethoven, which has with every volume resulted in a indeed fresh sound and also a profound rendering of these famous works.

This is the last CD in the series of the complete Beethoven Symphonies performed by Jan Willem de Vriend an his Netherlands Symphony Orchestra. With every cd in this volume De vriend has shown his fresh view on Beethoven, which has with every volume resulted in a indeed fresh sound and also a profound rendering of these famous works.

From the linernotes with this CD:"Although his behaviour did not always show it, Beethoven’s ideal was definitely that all people would be equal. (This is why Schiller’s text appealed to him at such a young age.) After all, it is often the case that people who have an ideal to which they devote themselves, with which they feel great affinity, are absolutely unable to attain it in their daily lives. There is something appealingly human about the fact that Beethoven had big ideals for himself – and for humanity – and that he could not integrate them in his personal life. But he could use the ideals in his work, he could unleash a musical revolution. Is it not moving that in the work of this man, who was such an earthy person, the divine spark can be observed so clearly? Beethoven will always continue to fascinate people. Whether you adore him, admire him, criticise him or find him abominable, friend and foe must agree that he played a major role in the history of music. Even today, when we hear his symphonies – and surely the Ninth – we can do nothing but agree that it is masterly music. Jan Willem de Vriend does not think that he is ‘finished' with Beethoven now that he has recorded all the symphonies. He will continue to philosophise about them, analyse scores and try to get the character of the era in focus – an ongoing and in-depth process. No, we are never finished with Beethoven! "- linernotes by Valentine Laout

Combattimento Consort Amsterdam devotes itself to the music of about 1600 to 1830. Since its founding in 1982, it has performed virtually throughout the world as well as on many CDs, DVDs and television productions.

Since De Vriend was named chief conductor in 2006, the Netherlands Symphony Orchestra has become a notable phenomenon on the Netherlands’ musical scene. It has presented semi-scenic performances of works by Mozart, Beethoven, Strauss and Mendelssohn. There were premieres of works by Offenbach, Say and Mahler. And by substituting historical instruments in the brass section, it has developed its own distinctive sound in the 18th- and 19th-century repertoire. Recently, the orchestra performed music by Schumann at festivals in Spain. The release of Beethoven’s complete symphonies, conducted by De Vriend, is a big project which starts with the release of this current CD. Also the orchestra's long Mahler tradition is being continued in recordings and tours.

The Netherlands Symphony Orchestra is an orchestra with passion, commitment and virtuosity. The orchestra serves the province of Overijssel with concert series in Enschede, Hengelo, Zwolle and Deventer. Another important role for the orchestra is accompanying De Nationale Reisopera andprovincial choral societies. Working with top musicians from all over the world has contributed towards the orchestra achieving its aim of bringing concerts of the highest quality to a broad public. Important conductors for the orchestra were Ed Spanjaard, Rudolf Barshai, Martin Panteleev, Mark Shanahan, Vasili Petrenko and Otto Tausk. Jaap Van Zweden made an indelible impression during his period as chief conductor and set the orchestra well and truly on the map. He will return frequently as guest conductor. Many great international soloists have worked with the orchestra – Gidon Kremer, Natalia Gutman, Heinrich Schiff, Jean-Yves Thibaudet and Charlotte Margiono to name a few.