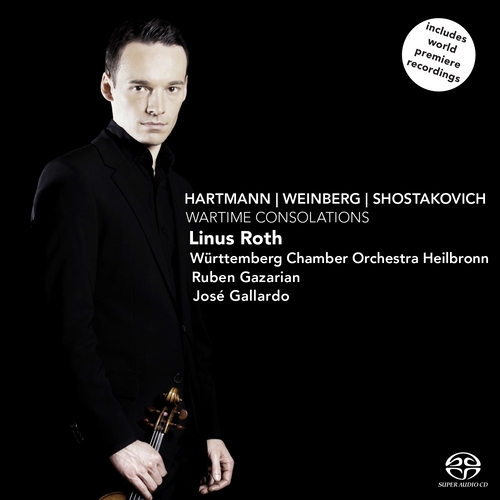 Shostakovich:
Unfinished Sonata (1945) for Violin and Piano Moderato con moto
What a delight, surprise, and opportunity it must be, for a musician to find an unperformed, unrecorded, entirely or relatively unknown piece of music by a major composer, indeed by one of the Greats Shostakovich in this case. What we have here is nothing less than Dmitri Shostakovich’s Unfinished Sonata for Violin and Piano the complete and massive double exposition of the first movement of what would have been a grand-scale work along strict classical lines. Shostakovich wrote it in June of 1945. Manashir Iakubov writes in the introduction of the score, published by the Dmitri Shostakovich Archive in 2012, that the sonata-movement contains a particularly strong link to the Tenth Symphony, in which Shostakovich would go on to recycle both themes of the exposition.

“On every portrait of Karl Amadeus Hartmann you notice the striking, radiant eyes of the composer” writes Klaus Kalchschmid about the composer. The communicative aspect was important to Hartmann, who was not interested in academic exercises: “While I work, I am also preoccupied with the effect of a work as a whole: The whole ought to represent a piece of absolute life truth that spreads joy and is connected to grief... I don’t want disimpassioned intellectualisms but a work of art with a statement.”

The Concerto funebre began life in a particularly dark period of Karl Amadeus Hartmann’s. Freedom, indeed humanity, seemed under siege in the late summer of 1939. In this climate, Hartmann set out to write a funereal piece for string orchestra in one movement. Just a few months later it had morphed into the four-movement Violin Concerto the Concerto funebre. The “Violin-Concertino” as the German composer and music theorist Winfried Zillig refers to it is such a profound and deeply personal musical statement that it communicates this with moving immediacy to the listener even today... It was “a counterpoint of profound mourning to the hysterical jubilations during the Polish campaign” (Zillig).

Weinberg had to listen to attacks on “cosmopolitanism” at the First Soviet Composers’ Union Congress in 1948. “Cosmopolitanism” of course being ominous Soviet-speak for “too Jewish”. That was the year when Weinberg first took to the concerto form, writing his Concertino for Violin and Strings while on summer holidays: its lyrical sweep and its tender gracefulness are magnificent. Right around the same time, and equally of (partially) upbeat and romantic disposition is the Rhapsody on Moldavian Themes op.47: he thought strictly of his mother’s homeland when working on this rousing miscellany of tunes and themes that doesn’t sound so differently from what the Georgian Aram Khachaturian composed at the time.