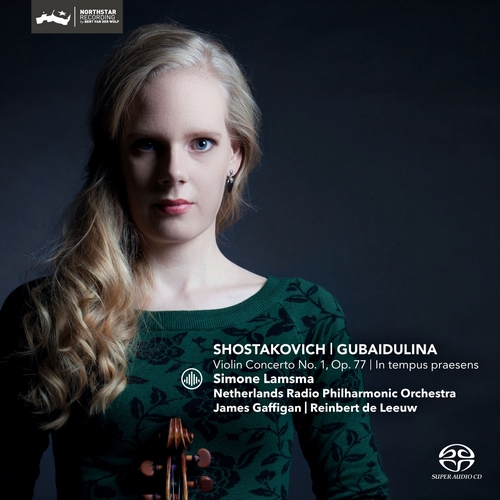 Gubaidulina:
In tempus praesens
The structure of Shostakovich’s First Violin Concerto is particularly original, with a sequence of four movements – slow, fast, slow, fast – entitled Nocturne, Scherzo, Passacaglia and Burlesque. The opening movement (Nocturne) is a beautiful song, blossoming from a single melodic fragment. The Scherzo is biting and dazzlingly virtuosic, like a carousel gone wild. The ensuing Passacaglia is, quite simply, the pinnacle of this concerto; a masterpiece – mature, elegiac and highly lyrical. The passacaglia theme is repeated nine times with contrapuntal elaborations. This is followed by a large-scale cadenza that forms a bridge to the finale. The concerto closes with a Burlesque, in which the theme from the Passacaglia has one final, piercing reappearance.

Shortly after the premiere of Gubaidulina’s Offertorium (1981), the Swiss patron of the arts Paul Sacher asked her to compose a further violin concerto for the German soloist Anne-Sophie Mutter, but nothing came of this due to lack of time. It was only in 2007, eight years after Sacher’s death, that Gubaidulina completed In tempus praesens, which was given its premiere by Mutter at the Lucerne Festival. It is a work of extreme contrasts in which very deep, infernal passages are juxtaposed with extremely high, celestial episodes. Much more so than Offertorium, In tempus praesens is a spectacular work for the violinist, who plays virtually from start to finish and barely has a chance to pause for breath. The virtuosity demanded by the work is never an end in itself.

Pizzicato on Lamsa’s first release on Challenge Classics (CC 72677): "The surround recording from Challenge Classics stands out due to especially brilliant and powerful interpretations and a finely coordinated dialogue between the instruments. This is perfect harmony."
Shostakovich recorded at Studio 5 Broadcasting Music Center, Hilversum on 12 & 14 May 2016, Gubaidulina recorded at Royal Concertgebouw, Amsterdam on 22 October 2011