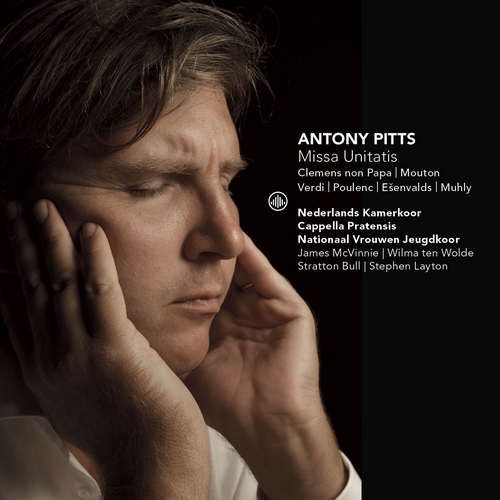 Jacobus Clemens non Papa:
Ego flos campi
This program around the Missa Unitatis represents a meeting of many different musical travellers. Shortly after making its home in the southern Dutch city of ’s-Hertogenbosch in 2006, Cappella Pratensis renewed its acquaintance with an organisation that has been travelling through some 700 years of history, the Confraternity of the Illustrious Lady. To celebrate the Year of Religious Heritage in 2008, the Confraternity commissioned a work by the British composer Antony Pitts. The commemoration, in 2016, of 500 years since the death of Hieronymus Bosch was the ideal opportunity to premiere the version of the Missa Unitatis for double chorus. The Nederlands Kamerkoor graciously accepted the invitation to join forces with Cappella Pratensis, and the celebrated British musician Stephen Layton brought his wealth of choral experience as conductor.
Recording: Tracks 1, 2, 4, 6, 7, 9, 10, 11, 13, 15 & 16: 6-8 May 2016, Sint Catharinakathedraal, Utrecht, The Netherlands; Tracks 3 & 12: 22 April 2016, Pieterskerk, Utrecht, The Netherlands; Track 8: 5 Juni 2015, Westvestkerk, Schiedam, The Netherlands