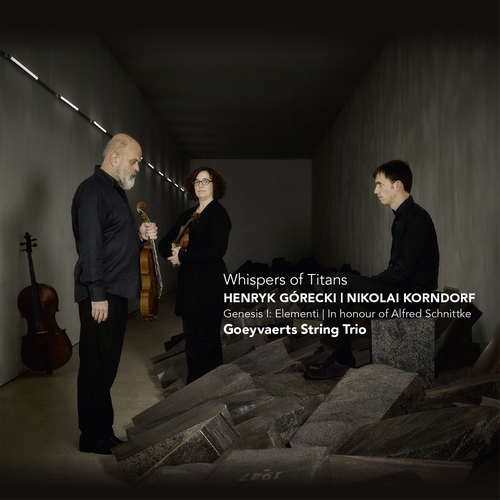 Górecki:
Genesis I Elementi per tre archi op. 19 no. 1

Medieval, Romantic, Minimalist, Avant-garde – all find a place in the music of Nikolai Korndorf. Yet his work rarely sounds eclectic, the ideas and techniques combining to form a focussed, and often uncompromising, musical language. Korndorf’s compositional career falls into two periods. His early work follows the Modernist trends of the time. But from the early 1980s, Korndorf adopted a new approach, more diverse, if no less austere. Tonality became an important element of his music, although more as a point of reference than an integral part of his harmonic language. The String Trio was completed in 1986, so dates from the early years of this second style. It was written in homage to Alfred Schnittke, a mentor figure for Korndorf and many other composers of his generation. “He was a teacher. His ideas, his oeuvre, his moral position, his attitude towards art were teachers as well….Influence, the effect of Schnittke on younger composers was much wider than the influence of style, it was an influence of world outlook.” The result is a work that draws on many aspects of Schnittke’s compositional technique, while only occasionally sounding like him. Korndorf’s own compositional outlook is just as significant to the work, especially his interest in Medieval Russian hymnody and American Minimalism.