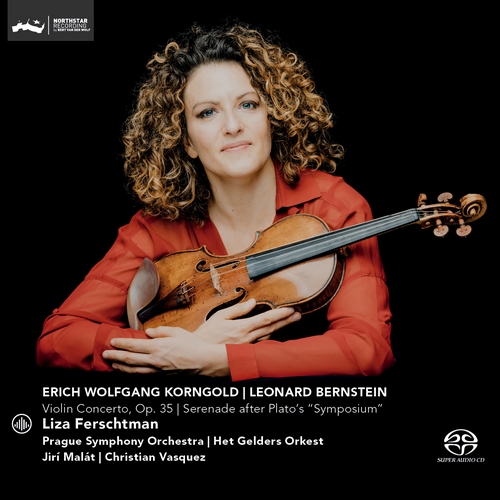 Leonard Bernstein:
Serenade after Plato’s “Symposium”
Korngold’s Violin Concerto was completed in 1945. This is a beautiful, late Romantic work that harks back clearly to Korngold's earlier compositional style, when he was a younger man living in Vienna. But had he really turned his back on film music he was used to compose in America? Every movement of the Concerto is scattered with fragments from a range of his film scores. The Violin Concerto was a huge success at its premiere, not least due to the performance by Jascha Heifetz as soloist.

The 1950s, a period when Korngold's career and indeed his life were drawing to a close, were a most productive time for Leonard Bernstein. He was achieving major successes on Broadway with his musicals.

The Serenade for violin, strings, harp and percussion had its premiere in Venice in 1954. There were two factors behind the composition. He had accepted a commission from the Koussevitzky Foundation. Also, he had long been promising a new piece for his close friend, the violinist Isaac Stern. Both of these commitments coincided in the Serenade, an extremely lyrical, five-movement work, akin to a violin concerto.
Violin Concerto Op. 35 recorded at BASF-Feierabendhaus, Ludwigshafen, Germany, 22 & 23 November 2017; Serenade after Plato’s “Symposium” recorded at Musis, Arnhem, the Netherlands, 9 & 13 June 2017