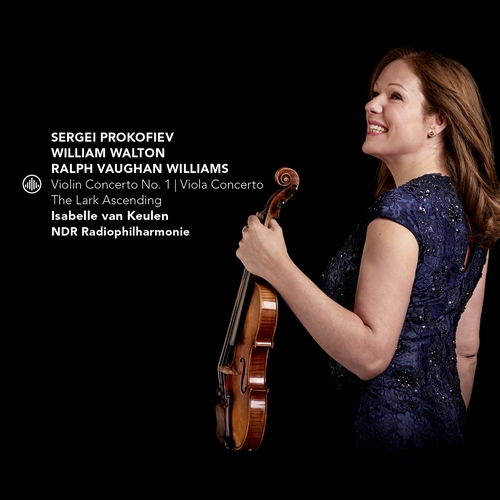 Ralph Vaughan Williams:
The Lark Ascending
Here is a disc whose contents seem odd as it couples the violin concerto of a (still) Russian composer to the viola concerto of an English one. Instead, the coupling is very clever since Prokofiev’s First Violin Concerto, whose premiere was in 1923 (while the composer was still living in France, a few years before his return to Soviet Union) served as a much-admired model to Walton’s Viola Concerto, whose first performance was played by Paul Hindemith in 1929. The similarities between the two works go beyond the three-movements structure slow-quick-slow and concern themes, accompaniments and the rondo form of the virtuoso central Scherzo.

The smart idea of such unusual coupling came to one of the few great living violinists who can really play the viola with equal skill: Isabelle van Keulen. This glorious disc is crowned by the orchestrated version of Vaughan Williams’ masterpiece The Lark Ascending. One of German radio best orchestras, the NDR Radiophilharmonie, is conducted by Andrew Manze (Prokofiev), Keri-Lynn Wilson (Walton) and Andrew Litton (Vaughan Williams).
Recorded at Großer Sendesaal im Landesfunkhaus NDR, Hannover, 5-9 March 2018 (Concerto No. 1); 12-13 March 2015 (Viola Concerto); 26 January 2015 (The Lark Ascending)