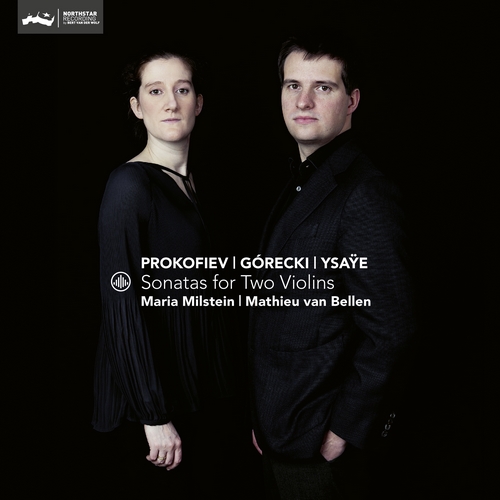 Eugene Ysaye:
Sonata for Two Violins
The setting of this album - two violins without accompaniment - is no ordinary combination, and the repertoire, though encompassing several style periods from the Baroque to the 21st century, is much smaller than that of a more standard duo such as violin and piano.

When choosing a program for this CD, we were adamant to present works which, rather than using virtuosic violin display as a means to an end, are masterworks in their own right, where the virtuosity of writing is a simple tool used to create breathtaking landscapes and thrilling stories. Three different countries and three different universes, though all three composed within less than half a century - the Sonatas for Two Violins by Serguei Prokofiev, Henryk Górecki and Eugene Ysaye show with their incredible variety how exciting a violin duo can be.
Recorded at Galaxy Studio’s, Mol, Belgium, 18 - 21 December 2018. Maria Milstein plays on a violin by Michel Angelo Bergonzi (Cremona, ca. 1750). Mathieu van Bellen plays on the ex-Adolf Busch G.B. Guadagnini violin (Turin, 1783).