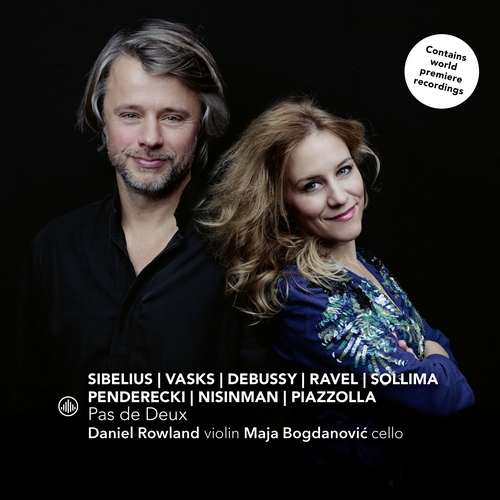 Astor Piazolla:
Three tangos
Maja and Daniel: We are overjoyed to be presenting this new recording “Pas de deux”, with many new pieces by composer friends - it’s a project that’s very close to our hearts. The great Sonata by Ravel is in a way our kaleidoscope, a looking glass that takes us both back and forward in time, and both of those simultaneously.

Our journey begins with the slightest of pieces. ‘Raindrops’ is a charming vignette by the 10 year old Sibelius, whose love of nature would a decade or so later of course give us some of the greatest works in the symphonic repertoire. Deeply moved by the death of Pope John Paul II Penderecki in 2005 wrote the Ciaconna in memoriam Giovanni Paulo II Ciaconna, for string orchestra. His transcription of the piece is a self-contained, independent artistic statement: subtle and virtuosic, filled with emotions of a genuinely Romantic kind.

The Interior Castle by Peteris Vasks was a text written by St. Teresa of Ávila, Spanish Carmelite nun and famed mystic, in 1577 as a guide for spiritual development through service and prayer. The work is conceived as a tryptich of pure, deeply felt, reverential music, interrupted my two frenetic, disturbing, dark passages. The love and belief conquers the dark forces. We asked our friend Craig White to arrange a Debussy piano prelude and he created for this disc this beautiful version of the 9th piano prelude of Book 1.

Sicilian cellist/composer Giovanni Sollima is one of the most colorful, eclectic, musical personalities of his generation. Heimat Terra: the title is based on a beautiful text by the anthropologist Edgar Morin.

Marcelo Nisinman is one of the great tango artists of our time, a brilliant bandoneon virtuoso and great friend as well as a uniquely personal, eclectic composer of music that is deeply infused by the world of tango but very aware of classical avant-gardistic writing. Marcelo Nisinman got to know Astor Piazzolla as a child, when Piazzolla and his quintet used to come to rehearse at his parents apartment in central Buenos Aires. From Marcelo we heard many stories about Piazzolla, his passion for boxing and shark fishing, his motto ‘no risk, no life’ and his larger than life personality. It seems fitting to end this record with three early ‘Parisian’ tangos that Piazzolla wrote while living in the city in the early 1950’s.
Recorded at Potton Hall, Suffolk, UK, 26 – 28 September 2019. Daniel Rowland plays the “Ex-Rode” Guarneri del Gesu violin (Cremona ca. 1736). Maja Bogdanovic’s instrument was custom made for her by French luthier Frank Ravatin.